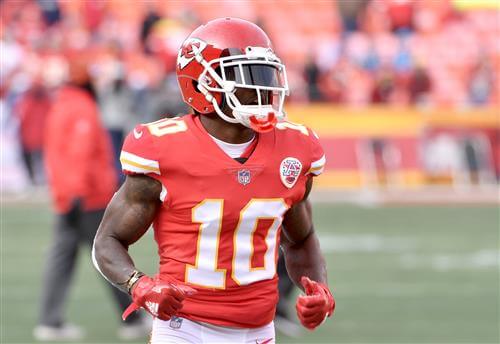 Before off-field issues put the career of Chiefs receiver Tyreek Hill in limbo, talks on a long-term deal had begun. Forgotten in the events of the past four months is the fact that those talks may have hit a snag, unrelated to the off-field issues.

Here’s what Jay Glazer wrote in a mailbag for TheAthletic.com, several weeks after he called the shot of the offseason by predicting that Odell Beckham could be traded: “[T]here were questions in Kansas City about whether they could re-sign Tyreek Hill. I heard some rumblings at the start of free agency that his name was being thrown about in trade talks, but at the time thought it had to do with his contract more than anything else.”

It’s possible that the Chiefs had caught wind of what may be in the pipeline from a legal standpoint and explored cutting and running, but it’s hard to imagine coach Andy Reid deliberately sandbagging another team about a situation that, at the time, could have jeopardized Hill’s 2019 season and possibly beyond. So it’s possible that Hill simply wants more than the Chiefs are able or willing to pay, given that they soon will be both breaking the bank and blowing open the vault for Patrick Mahomes.

Contract talks are expected to resume soon regarding Hill. If there’s an impasse, a trade becomes one of the options, either in before the 2019 deadline (less likely) or in early 2020 (more likely, if the Chiefs decide to take that path).