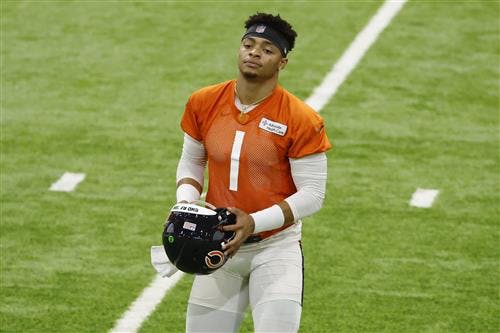 The Chicago Bears have been saddled with a quarterback curse for generations. The team hasn't employed a truly elite signal-caller since Sid Luckman led the team to four championships in the 1940s and has suffered through decades of brutal performances at the position.

Chicago hoped to put an end to that miserable run by trading up in the 2021 draft and selecting Justin Fields at No. 11 overall. Fields went into his first season as a backup to Andy Dalton but was quickly thrust into the lineup after the veteran went down with an injury early in the campaign.

Fields would retain the starting job for much of the year. While the young signal-caller flashed potential, it was largely a season full of disappointment.

The Ohio State product completed only 58.9 percent of his passes for 1,870 yards and seven touchdowns. He threw 10 interceptions and was sacked 36 times while winning just two of his 10 starts.

Despite the poor statistical showing and lack of victories, there is still hope for the future and a real chance that Fields turns things around as a sophomore.

It was clear that Fields was becoming more comfortable as he continued gaining valuable experience. This was reflected by a solid 76.9 PFF overall grade and a downright impressive 90.5 passing grade outside the pocket over his final five starts—marks that would respectively rank top-10 and No. 1 overall amongst qualifying QBs.