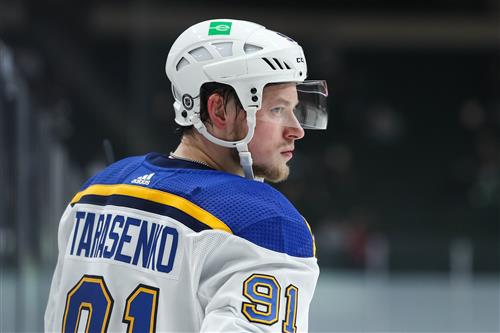 After nine seasons with the St. Louis Blues, Vladimir Tarasenko could be on the move this summer. Daily Faceoff's Frank Seravalli reported Tuesday the club is exploring a trade for the 29-year-old right winger.

NHL
Trade packages for Seth Jones: What the Blackhawks, Avs, Kings and Flyers could offer the Blue Jackets?

His second and third shoulder surgeries, however, limited Tarasenko to just 34 regular-season games over the past two seasons. On June 1, The Athletic's Jeremy Rutherford speculated the winger might welcome a trade if the Blues build a more grinding, blue-collar roster.

St. Louis carries $17.4 million in projected salary-cap space for 2021-22, with key players such as Jaden Schwartz, Jordan Kyrou, Robert Thomas, Vince Dunn, Mike Hoffman and Tyler Bozak needing to be re-signed or replaced. Shipping out Tarasenko could free up cap room and perhaps add a player who might fit best within the system.

Tarasenko has two seasons remaining on his contract with an average annual value of $7.5 million. He also carries a full no-trade clause, but Seravalli reported Tarasenko has "alerted" the Blues to preferred trade destinations.

His injury history and cap hit could make Tarasenko difficult to move since the cap could remain at $81.5 million for 2021-22. Nevertheless, teams desperate for scoring punch could be willing to take him on.

Here are the top landing spots for the Blues sniper. Teams' roster needs and cap space factored into this compilation. Weigh in with your thoughts in the comments.

The Florida Panthers were among this season's highest-scoring teams, finishing fourth with 3.36 goals per game. After failing to advance beyond the opening round of the playoffs, general manager Bill Zito could attempt to load up for a deep postseason push next year.

A lack of scoring depth on the right wing is an issue for the Panthers. While Patric Hornqvist, Anthony Duclair, Frank Vatrano and Owen Tippett skated at that position this season, none of them have Tarasenko's scoring pedigree.

The opportunity to play for a rising club such as the Panthers could be enticing for Tarasenko. He could slot in on the top line alongside center Aleksander Barkov or on the second line with high-scoring left winger Jonathan Huberdeau.

The Panthers will get some additional cap room when they lose a player to the Seattle Kraken in the July 21 expansion draft. They could also request that the Blues absorb part of Tarasenko's cap hit to facilitate a deal.

Los Angeles Kings general manager Rob Blake spent the past two seasons rebuilding the roster with promising young players and restocking his prospect pipeline. Having already acquired one scoring forward in Viktor Arvidsson from the Nashville Predators, he could add another by pursuing Tarasenko.

An anemic offense contributed to the Kings' tumble out of the playoff chase in the West Division. Their 2.54 goals per game was 27th. With veteran Drew Doughty expressing concern about the time he has left to compete for another Stanley Cup, an established scorer such as Tarasenko could provide a much-needed offensive boost.

On June 8, TSN's Darren Dreger reported L.A. hoped to acquire two top-six forwards through trades or free agency. Tarasenko could fill the right wing spot alongside top-line center Anze Kopitar. Signed through 2022-23, he also wouldn't be a mere one-year rental player. At 29, he could have several good seasons remaining if fully recovered from his shoulder surgeries.

With $15.4 million in projected cap space and all their core players under contract for 2021-22, the Kings have room to absorb Tarasenko's $7.5 million cap hit. They also possess considerable depth in promising youngsters to dangle as trade bait, though Blake won't part with top prospects Quinton Byfield and Alex Turcotte. He could also flip back the Blues' second-round pick he acquired via the Vegas Golden Knights in 2020.

At the very least, Tarasenko could help the Kings buy time for some of their budding talent to finish developing into full-fledged NHL players.