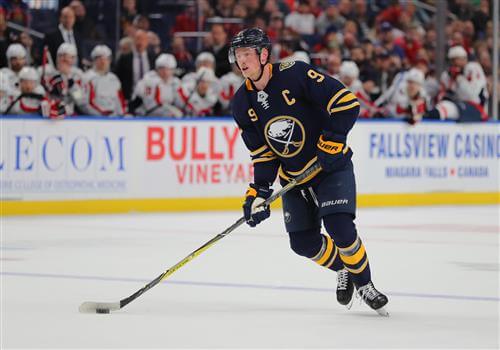 The Buffalo Sabres' surprising front-office shakeup on June 16 raised questions about center Jack Eichel's future with the franchise. Two weeks before the Sabres' front-office purge, the 23-year-old Sabres captain expressed his frustration over the years of constant losing.

That doesn't mean Eichel had a hand in those changes or requested a trade. He lacks a no-trade clause for 2020-21 but carries a hefty $10 million annual average value through 2025-26. Nevertheless, the day following the Sabres' front-office clear-out, NBC Sports Boston's Joe Haggerty wondered whether Eichel might be available and what it might cost the Boston Bruins to acquire him.

Kevyn Adams, the Sabres new GM, probably won't part with his young superstar. Eichel is not just the Sabres' franchise player—he's also among the elite centers in the NHL. He finished this season 10th among the league's leading scorers with 78 points.

Pundits such as NHL.com's Dan Rosen and The Athletic's John Vogl dismissed the possibility of the Sabres shopping Eichel. If he were put on the block, both believed the asking price would be high. Rosen felt it would involve "high draft picks, top prospects and at least one key NHL player" to get a deal done.

The Stanley Cup playoffs have pushed the Eichel trade speculation out of the headlines. With the offseason fast approaching and the trade market returning to life, that chatter could resume among the pundits. Assuming Adams is at least willing to entertain offers for Eichel, here's a look at the top five landing spots and what the returns might be.

After another disappointing early playoff exit (the fourth in the past six seasons) by the Calgary Flames, it could be time for general manager Brad Treliving to shake up his roster. Acquiring Jack Eichel would do the trick.

Flames left wing Johnny Gaudreau could be in need of a better first-line center. His numbers tumbled from a career-high 99 points in 2018-19 to 58 in 70 games this season. Despite calls by some unhappy Flames followers to trade Gaudreau, he insisted he wants to stay in Calgary during his season-ending press conference.

Eichel would certainly help the 5'9", 165-pound Gaudreau shoulder the offensive burden. His offensive skills would mesh well with those of the diminutive winger. Having been Sabres captain for the past two seasons, he has considerable leadership experience, making him tailor-made to replace aging Flames captain Mark Giordano in a few years.

Connor McDavid was selected first overall by the Edmonton Oilers ahead of Eichel in the 2015 NHL draft. Having Eichel on the Flames would put the two best players from that draft in the same province, providing additional heat to the legendary Battle of Alberta.

If Eichel is brought in as the Flames' first-line center, Sean Monahan must go the other way. The 25-year-old center has a 10-team no-trade clause. If the Sabres aren't on it, he'd be a good fit as their first-line center

Monahan, 25, is just two years older than Eichel. While he hasn't reached the same offensive heights, he's been consistent, scoring at least 22 goals in each of his seven NHL seasons and 48-plus points six times. His $6.375-million annual average value through 2022-23 would be more affordable for the Sabres, freeing up cap room for other moves.

The Sabres could also insist on the Flames including their first-round pick in the 2020 NHL draft. Another ask could be versatile forward Sam Bennett or promising winger Dillon Dube.

Solid goaltending and a deep defense corps enabled the Columbus Blue Jackets to qualify for the 2020 Stanley Cup playoffs. While they upset the Toronto Maple Leafs in the play-in round, their popgun offense contributed to their first-round demise at the hands of the Tampa Bay Lightning.

Blue Jackets general manager Jarmo Kekalainen has a history of swinging surprising deals. He shipped center Ryan Johansen to the Nashville Predators in 2015-16 for defenseman Seth Jones. Approaching the 2019 trade deadline, he acquired center Matt Duchene from the Ottawa Senators.

Landing Eichel would be an eye-catching move to address their offensive woes. He would also quickly become the face of the franchise and the first true first-line center in franchise history. With six seasons remaining on his contract, they wouldn't have to worry about losing him after a couple of seasons as they did with Artemi Panarin to free agency last year. The Blue Jackets have $74.4 million invested in 22 players with restricted free agents Pierre-Luc Dubois and Josh Anderson to re-sign. That doesn't leave much for Eichel's $10 million cap hit. On Aug. 21, The Athletic's Aaron Portzline reported center Brandon Dubinsky might not play again because of a chronic wrist injury. That could free up $5.85 million if he goes on long-term injury reserve.

Dubois would have to be part of this deal. While not on the same level as Eichel, the 22-year-old is a solid two-way forward who's grown into the first-line center role with the Blue Jackets. He netted 20 goals and 48 points as a rookie in 2017-18, 27 goals and 61 points last season and 49 points in 70 games this season.