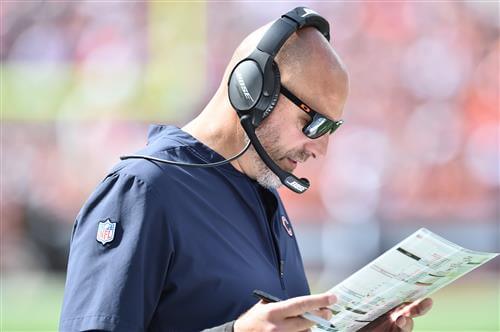 Justin Fields made his first NFL start today. There are no words to describe how poorly it went. It is impossible to understate how horrible Fields and the rest of the Chicago Bears offense performed against the Cleveland Browns.

It is not a referendum on Fields, though. Nor is it a reflection of how bad this Bears roster is. It was a statement game by Matt Nagy. A screaming exclamation to his bosses that he should not have a job.

It's impossible to understand how the Bears could justify keeping Nagy after today. Chicago allowed nine sacks on the day. Nine! Fields finished the day with 68 yards passing while completing only 30 percent of his passes. When taking into account how many yards were lost due to sacks, Nagy's offense mustered all of 47 yards. Less than 50 yards of offense. Across four quarters. The longest play by a long shot was an iffy pass interference penalty that gave them a free 48-yard gain.