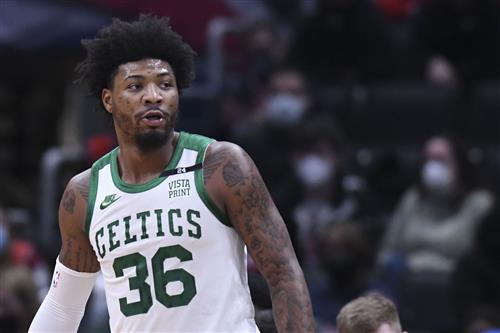 As we approach the NBA's February 10 trade deadline, names like Ben Simmons, Jerami Grant and a handful of Indiana Pacers are understandably generating the most headlines. But seemingly every year, the league has a way of surprising us.

Something unexpected typically happens leading up to the trade deadline. So while there hasn't been much (if any) reporting on any of the team-target connections made below, never say never.

No title contender is perfect. And each has a little ammunition to make a trade. But before we get into who they should target, a word on how "top contenders" were selected.

The teams from sixth to 10th are the Memphis Grizzlies, Brooklyn Nets, Philadelphia 76ers, Cleveland Cavaliers and Dallas Mavericks. The top five, as well as surprise trade targets they should pursue, are below.

A lot of things would have to break right for the Milwaukee Bucks to be able to pull Christian Wood off the tanking Houston Rockets.

First, Houston would have to make Wood available, which may be unlikely.

"The 26-year-old has been subject to interest around the league, and sources say Miami has been one of the more persistent teams in engaging with Houston on the versatile big man," Kelly Iko wrote for The Athletic. "But barring a blow-me-away offer, Wood should remain in Houston past the deadline."

Still, Wood is on a slightly different developmental timeline than Jalen Green, Kevin Porter Jr. and whomever the Rockets get in the upcoming draft. And his presence on the roster could hurt Houston's lottery odds, too. Reports like the one above are sometimes an effort to drive up trade value.

The other problem for the Bucks is that even if the Rockets do make him available, plenty of teams around the league might be able to beat whatever they could offer for him.

Milwaukee spent an enormous amount of future draft capital to acquire Jrue Holiday last offseason. That paid off with a championship last year, but the Bucks can't offer a first-round pick in a trade as a result. They can offer multiple future second-rounders, but Houston would probably prefer any offer that includes a first.

Going after Wood would also likely mean the departure of Brook Lopez, Milwaukee's longtime starting 5 who also contributed to last year's championship run. However, Lopez is seven years older than Wood and has played in only one game this season due to a back injury.

If the Bucks could enter the Wood sweepstakes with Lopez's contract, a talented young(ish) wing in Donte DiVincenzo and multiple second-round picks, it might be worth it. In that scenario, Milwaukee would get a more athletic three-and-D option in Wood who's closer to Giannis Antetokounmpo's age and more equipped to defend after switches on the perimeter.

Meanwhile, Houston would remove a productive veteran from its roster to help increase its lottery odds, add an intriguing wing/guard to play with Green and KPJ and bolster its stockpile of picks.

In terms of future draft assets, the Miami Heat are in a similar situation to the Bucks (though not quite as depleted). They owe the Rockets a first-round pick swap in 2022 and owe the Oklahoma City Thunder their lottery-protected first-round pick in 2023. They also have second-rounders outgoing in each year from now until 2027.

Still, if the injury-rocked Los Angeles Clippers were to become sellers ahead of the deadline, Miami might be able to entice them with a package that includes Duncan Robinson and a 2025 first-round pick.