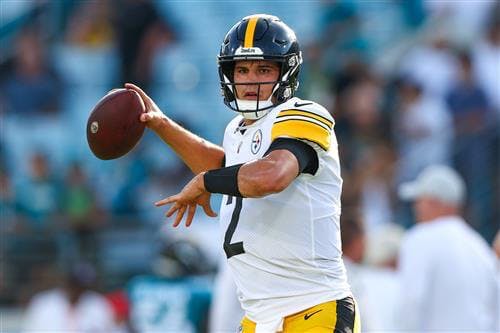 As teams prepare to unveil their 53-man rosters, there are multiple teams that would like Mason Rudolph to be part of that equation. The Steelers have received trade calls for Rudolph over the past week, but they have no interest in trading him unless the offer is simply too good to turn down, according to Mark Kaboly of The Athletic.

The Steelers reported reluctance to deal Rudolph makes sense given that he is the team's only quarterback that has experience within offensive coordinator Matt Canada's system. Rudolph also gives Pittsburgh coveted depth at arguably the league's most important position.

Rudolph's experience is likely the reason why Steelers general manager Omar Khan recently said that he doesn't anticipate any changes being made to Pittsburgh's quarterback room before the start of the regular season.

"We feel very good about the three quarterbacks," Khan said during a recent appearance on the "All Things Covered" podcast with Patrick Peterson and Bryant McFadden. "Coach will decide how things will shake out, but we feel good about the three guys we have on the roster."

The longest-tenured of the Steelers quarterbacks, Rudolph was 26 of 39 for 220 yards with two touchdowns this preseason while playing with Pittsburgh's second- and third-team offenses.