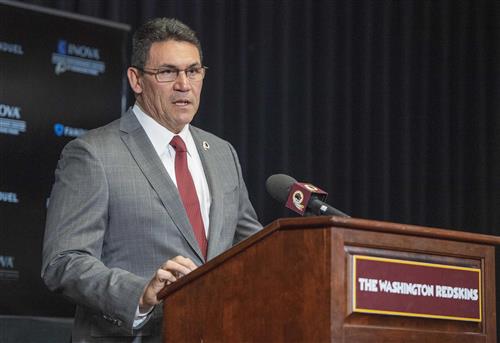 In nearly six months since becoming the new head coach of the Washington franchise, Ron Rivera hadn’t been asked about the team’s controversial name. On Monday, he was.

During a Monday afternoon interview on 670 The Score’s McNeil & Parkins Show, Rivera faced the subject. “I think that’s a discussion for another time,” Rivera said, adding that the team’s name was “always part of football” when he was growing up.

If it’s a discussion for another time, when is that other time? Many would say that, if right now isn’t the right time, there is no right time.”

“I think it’s all about the moment and the timing,” Rivera added. “But, you know, I’m just somebody that’s from a different era that when football wasn’t such a big part of the political scene. You know, that’s one of the tough things for me, too, is I’ve always wanted to try to keep that separate. People have wanted me to get involved in politics, you know, when I was coaching and I kept telling them, ‘It’s not for me to get up here and influence people.’ I have my beliefs, I know what I think, you know, I support the movements, you know, support the players. I believe in what they’re doing and, again, you know, I think that there are certain elements to certain things that it’s all about the timing and the best time to discuss those things.”