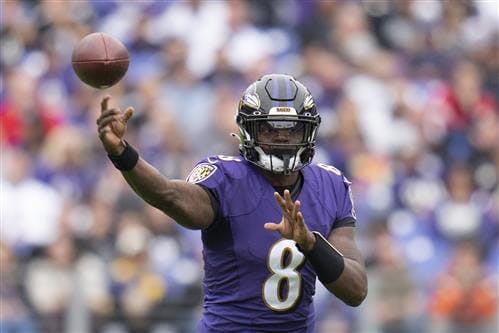 We're through 10 weeks of the NFL season and teams will soon start thinking about their 2023 offseason plans. Of course, part of that is their approach to free agency, with the negotiation period set to begin on March 13. Who should each franchise try to re-sign, and who will ultimately walk?

NFL analyst Matt Bowen looked at the current group of players primed to hit unrestricted free agency -- due to expiring contracts or deals in line to void -- and ranked the top 25 who might end up available, starting with one of the top quarterbacks in the game in Lamar Jackson. Five passers make the list, along with multiple playmakers on both sides of the ball. Factors in the ranking include age, positional value (QBs get a boost), expected future production and scheme versatility.

We're still a long way from the actual free agency period, though, and a lot can change. Bradley Chubb, who would have been high on this list, just signed an extension with Miami after being dealt to the Dolphins at the trade deadline. He won't be alone -- many of the players listed below will re-sign with their current franchises before March. So NFL analyst and former general manager Mike Tannenbaum predicted which ranked players will be re-signed or franchise tagged by their 2022 team and which ones will be allowed to test the open market. Let's jump in, starting with Jackson.

Why he could get paid: Jackson is the league's most electric player, with an upper-tier skill set that creates major issues for opposing defenses. He ranks fifth in Total QBR this season (65.0, up from 56.8 in 2021) and is averaging 7.4 yards per carry when he runs. With more than 2,000 total yards already this season -- and the positional value to demand a multiyear contract -- Jackson is clearly the top free agent next year. -- Bowen

Will he re-sign in Baltimore? Baltimore will do all that it can to keep him, even if that means using the franchise tag on Jackson, who will be entering his sixth season in 2023. The situation got slightly more complicated when the Ravens acquired linebacker Roquan Smith, another pending free agent who they will want to re-sign. -- Tannenbaum

Why he could get paid: Brown is a massive performer in the run game at 6-foot-8 and 340 pounds and utilizes his frame to compensate for average foot and body quickness in pass protection. This season, Brown has registered a pass block win rate of 89.6% when blocking for Patrick Mahomes in Kansas City. -- Bowen

Will he re-sign in Kansas City? The Chiefs invested a lot of draft capital in acquiring Brown from the Ravens, so I expect them to re-sign him to a big-money deal -- even though he's probably not a top-five offensive tackle in the NFL. -- Tannenbaum

Why he could get paid: Jenkins' injury history will be a part of this discussion, after he was limited to eight games last season. When healthy, he is a fleet-footed blocker with lateral agility and the skills to redirect in space. Jenkins has positional flexibility on the offensive line, too; he has more than 850 career snaps at both tackle and guard and also lined up at center 287 times in 2020. As a strong anchor in pass protection, he has a pass block win rate of 85.0% this season, a bit off his stellar career rate of 93.2%. -- Bowen

Will he re-sign in Green Bay? This is a tough one. Jenkins is a great player, but I'd be a bit concerned about signing him to a big guarantee because of the injuries. Green Bay might let him leave in free agency. -- Tannenbaum