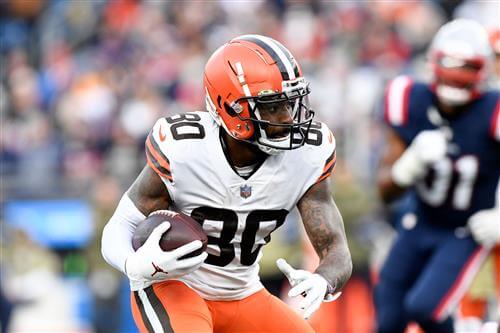 It may feel like the NFL season started just a few weeks ago, but time flies when football is involved. We've already reached December and the final six weeks of the 2021 campaign. There are still plenty of snaps left, but teams have at least one eye on the post-Super Bowl world.

The 2022 offseason will inevitably involve trades. As franchises look to retool rosters, manage the salary cap and jockey for draft positioning, notable pieces will move.

The following nine players have either already been the subject of trade chatter or are entering situations that would make a trade logical. We'll rank them based on proven production, upside, health and positional value.

The Philadelphia Eagles made former Washington State offensive tackle Andre Dillard the 22nd pick in the 2019 draft. However, Dillard has failed to develop into a full-time starter and was the subject of trade chatter before the Nov. 2 deadline.

"The Eagles won't give him away, and there are scenarios where he's a part of their future, anyway," NFL Network's Ian Rapoport wrote. "But teams believe a quality second-day pick would be enough to pry Dillard away."

The Eagles kept Dillard, but he has only played special teams snaps since getting 14 offensive reps in Week 8. Philadelphia may view him as a fine piece of insurance now, but it might want to move him in the offseason.

He has proven little, but he's still a 26-year-old left tackle with a first-round pedigree and has plenty of untapped potential. He'll also be on the final year of his rookie deal next year and is a cap-friendly option for interested teams.

The Eagles won't recoup a first-rounder for Dillard, but they should get something of value.

Baltimore Ravens cornerback Marcus Peters would rank higher on this list if he weren't recovering from a torn ACL and set to carry a cap hit of $15.5 million in 2022. He represents a fairly sizable risk and could be a cap casualty anyway—only $5.5 million in dead money remains on his deal.

These are all reasons the Ravens could be willing to move Peters, though. Baltimore's defense has survived without him, and the Ravens hold the top seed in the AFC. The Ravens could easily determine that they don't need Peters at his price point, and they would likely get a decent return.

He is a three-time Pro Bowler with an impressive 31 career interceptions. He'll turn 29 in January and will still be in his prime—provided he's back to 100 percent, of course. While Peters was a bit of a risk-reward cover corner early in his career—he had three picks but allowed six touchdown passes in 2018, for example—he's been more consistent since arriving in Baltimore.

Cover corners are generally in high demand, and Peters should draw plenty of interest if he lands on the trade block. His health will be a concern, but at least one team should be willing to bank on a return to pre-injury form.