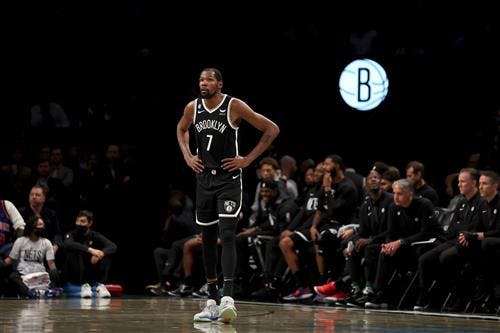 One of the best, tragic, mind-boggling, and maddening things about history is that it often repeats itself. Take the Philadelphia 76ers for example: despite two different coaches, a litany of lottery talent, and regularly retooling the lineup, the team has failed to get out of the Eastern Conference Semifinals in two decades.

Okay, so that’s the bad part of history repeating itself. But what about when the repeat has the chance to be a net positive? Like when the Sixers were reportedly interested in bringing Kevin Durant to the City of Brotherly Love over the summer. Surely that couldn’t possibly repeat itself, right? Not after the Brooklyn Nets and Durant totally, 100% buried the nuclear bomb hatchet by agreeing to “move forward together.”

According to Heavy Sports insider Sean Deveney, the Sixers will almost certainly inquire about Durant at a time when the Nets are once again under a mountain of internal and external scrutiny.

“There is no doubt the Sixers have asked on Durant, they did in the summer, and will keep asking about him,” an Eastern Conference executive told Deveney. “But the Nets are going to be a little put off by them already because of the Ben Simmons thing because they feel like they were set up to give away James Harden all along. So the Sixers burned them once, do the Nets want to go back and say, OK, sure, we’ll do a KD deal, too.”

According to the executive, the only sticking point could be what the Sixers have to fork over in return for Durant. And buckle up for more déjà vu.