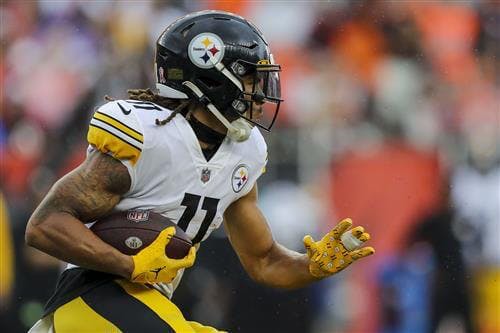 The Green Bay Packers are reportedly believed to be heavily in the market for wide receiver help as the Nov. 1 NFL trade deadline approaches.

According to ESPN's Jeremy Fowler, multiple general managers are "certain" the Packers want a wideout amid a disappointing 3-3 start to the season that has featured back-to-back losses to the New York Giants and New York Jets.

Fowler noted that Pittsburgh Steelers wide receiver Chase Claypool would make sense as a potential target for the Packers since he was believed to be available during the preseason, although the asking price was high.

NFL
Aaron Rodgers: If there’s a trade opportunity, I expect Packers to be in the mix

Entering the season, there were huge question marks surrounding Green Bay's wide receiver situation, as the Packers traded Davante Adams to the Las Vegas Raiders and didn't bring in anyone close to his level.

Second-round pick Christian Watson and fourth-round pick Romeo Doubs have shown flashes, but it is clear that neither has gained the full trust of quarterback Aaron Rodgers yet.

Rodgers did seem to have a nice rapport with veteran free-agent signing Sammy Watkins. However, he landed on injured reserve with a hamstring problem and is yet to return.