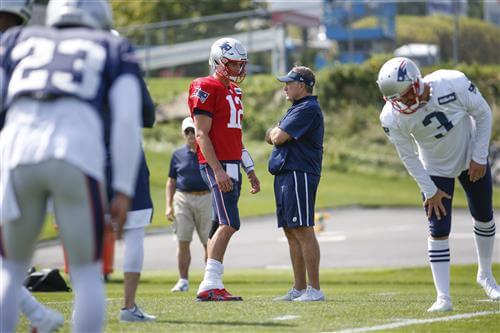 Earlier this month, Patrick Mahomes signed a 10-year extension that will keep him in Kansas City through the 2031 season. With his quarterback secured for the longterm, Chiefs coach Andy Reid did not rule out coaching for the duration of Mahomes' contract. That's great news for Chiefs fans but not so great news for opposing NFL defenses that will have to face against Kansas City's dynamic duo in the years to come.

If what they did during the past two seasons is any indication of what's to come, Reid and Mahomes appear destined to eventually be on the Mount Rushmore of the greatest coach/quarterback duos in NFL history. The league has had a slew of great coach/quarterback pairings over the years, partnerships that have helped shape dynasties while changing the way the game is played today.

Given Reid's desire to coach well into the 2020s (at least), we decided to take a look at the greatest coach/quarterback duos in NFL history, a list that Reid and Mahomes will surely join sometime in the near future.

Here is the criteria used to make this list:

Other notable achievements/accolades won during their time together

Number of years spent working with one another

Their combined legacy within the NFL

Where does your favorite coach/quarterback duo rank on the all-time list? Let's find out.

While they had more non-playoff seasons than playoff seasons together, Coughlin and Manning helped orchestrate two of the most improbable postseason runs in NFL history. In 2007, the Giants upset the Cowboys and Packers in the playoffs before shocking the previously undefeated Patriots in Super Bowl XLII. Four years later, Manning helped lead the Giants back to the Super Bowl, where they again upset the Patriots in dramatic fashion.

A two-time Super Bowl MVP, each of Manning's five Pro Bowl seasons came under Coughlin, who served as Manning's coach during his first 12 seasons with the Giants. During that span, the Giants won 102 games despite playing in one of the NFL's most competitive divisions.

"As you look back, I think we're both proud of the fact that we came from, at that time, a minority group of people, who could take a lot of pride of what we accomplished," Plunkett said during an interview with NFL Films. "We're proud of the fact that we are Mexican American, where we came from, what we accomplished. And people can look up to that and strive to achieve for success in their own right, and that's all good."

Despite being drafted by the NFL's Cardinals at No. 12 overall, Namath chose to play in the Jets after being the AFL team's No. 1 overall pick in the 1965 draft on the same day. Namath's decision proved to be the right one, earning a Pro Bowl selection during his rookie season. Two years later, Namath became the first player to throw for over 4,000 yards in a season. The following year, Namath helped lead the Jets past the Raiders in the AFL title game. New York's reward was a showdown with the heavily favored Jets in Super Bowl III. The game was personal for Ewbank, who won two titles with the Colts before Baltimore fired him after the 1962 season.

In Super Bowl III, Ewbank's coaching and Namath's mastery of the Jets' offense helped propel New York to a shocking 16-7 victory. Namath, who shortened his drop back in order to beat the Colts' formidable pass rush, completed 17 passes while not throwing an interception. He did not throw a single pass during the fourth quarter while instead choosing to hand the ball to Matt Snell, who pushed Baltimore's defense to the tune of 121 yards and a touchdown on 30 carries. The win not only gave the AFL much needed legitimacy, it helped turn the Super Bowl into the spectacle that it is today. It also punched Namath and Ewbank's eventual ticket to the Hall of Fame.

The Chargers literally caught lightning in a bottle in 1978, when the team hired offensive mastermind Don Coryell the same year the league made several rule changes that helped open things up for the quarterbacks. Coryell immediately took advantage of the new rules while allowing Dan Fouts (who won just 12 games during his first five years as the Chargers' quarterback) the freedom to throw the ball downfield at his leisure.

The result was one of the most explosive passing offenses the league has ever seen. From 1979-82, Fouts led the league in passing each season while leading the Chargers to a 39-18 regular season record. In the divisional round of the 1981 playoffs, Fouts threw for 433 yards and three touchdowns while helping the Chargers escape Miami with a 41-38 overtime win over the Dolphins. The following season, Fouts, the 1982 Offensive Player of the Year, led the Chargers to a thrilling come-from-behind win over the Steelers in the wild card round. The Chargers were never able to get to the Super Bowl, however, as San Diego lost consecutive AFC title games in 1980 and '81.

"We'll be judged base upon our failures but also upon our entrainment value and how people remember us," Fouts told NFL Films in a documentary on the '81 Chargers. "People remember the San Diego Chargers as a team that they enjoyed watching.