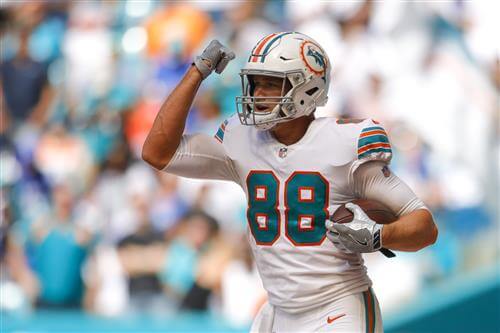 The 2022 NFL free-agent market will feature droves of players who sign eye-popping contracts.

Fans know the big hitters. Davante Adams, Allen Robinson II, Chris Godwin, Brandon Scherff, Akiem Hicks and Chandler Jones are some of the guys about to top the list.

NFL
Which NFL Teams Are the Most Desperate Heading into 2021 Trade Deadline?

But what about lesser-known names? How about unexpected big performers in contract years? Think Bud Dupree, who looked like a mid-tier free agent until an 11.5-sack outburst in 2019 earned him a franchise tag before an $82.5 million contract over five years a season later.

These are similar soon-to-be free agents who have saved their best performances for last.

Over his first three seasons, Miami Dolphins tight end Mike Gesicki never came close to hitting the stratospheric ceiling onlookers expected of the second-round pick who checks in at 6'6" and has superb athleticism.

But Gesicki has rewritten the narrative in 2021. After posting 703 yards and six touchdowns last year on 53 catches in 15 appearances, he is already up to 30 catches for 342 yards and a score in just six games. He's averaging 11.4 yards per catch and a career-high 57 yards per game.

Most impressive, though, is the fact he's leading the Dolphins in receiving and has already generated eight plays of 20-plus yards with 18 first downs. His career bests are 10 and 36, so he's going to shatter those marks.

Part of Gesicki's inevitable big payday is another team's projecting he can be even more productive in a better passing offense.

Not many people had a De'Vondre Campbell breakout on their bingo cards this year.

But the veteran linebacker is doing just that during his first season with the Green Bay Packers after four solid years with the Atlanta Falcons and one with the Arizona Cardinals. He was a fourth-round pick in 2016.

Through six games, Campbell has earned a stellar 84.7 Pro Football Focus grade (placing him on the cusp of the "Pro Bowler" category) by way of a team-high 55 tackles with two interceptions and three passes defended. He's PFF's highest-graded inside linebacker. Prior to this year, he had never graded at even 70.0.

Some of his success is situational. Campbell gets to play behind an elite presence in Kenny Clark and alongside Preston Smith. But the Packers and other contenders will seek this production, even on a lucrative short-term deal as Campbell nears the age of 29.