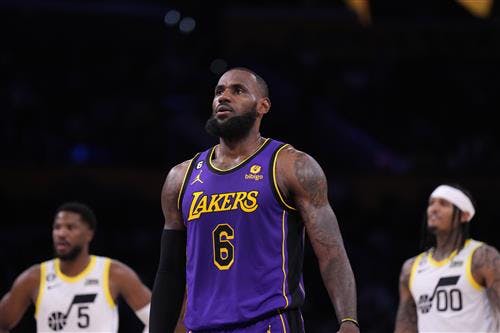 Los Angeles Lakers forward LeBron James has long been one of the NBA's vocal leaders on social issues, and on Friday night he discussed the situation concerning his former teammate, Kyrie Irving, who was recently suspended for at least five games by the Brooklyn Nets for posting a Twitter link to a documentary featuring antisemitic material and failing to issue a sufficient apology in a timely manner.

Following the Lakers' 130-116 loss to the Utah Jazz, James said that he felt Irving's behavior was harmful, and that he does not condone hate towards any group.

"It's simple. Me, personally, I don't condone any hate to any kinds, any race, to Jewish communities, to Black communities, to Asian communities. You guys know where I stand," James said. " ... I believe what Kyrie did caused some harm to a lot of people. He has since, over the last -- today, or was it yesterday -- he apologized. But he caused some harm, and I think it's unfortunate.

"I don't stand on the position to harm people when it comes to your voice or your platform or anything. So it doesn't matter what color your skin is, how tall you are, what position you're in -- if you are promoting or soliciting or saying harmful things to any community that harm people, then I don't respect it. I don't condone it."

James, who played with Irving for three seasons with the Cleveland Cavaliers, also referenced the recent decision by his production group, SpringHill Company, not to air a recorded episode of "The Shop" that featured rapper Kanye West. According to ESPN's Andscape, West doubled down on antisemitic remarks during filming, which led to the company choosing not to release the episode.