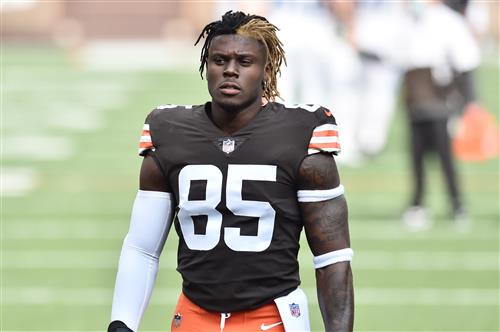 A handful of young players around the NFL could use fresh starts with new teams in 2021.

Plenty of youngsters will have a chance to sign somewhere else in free agency. However, for others still under contract through 2021, an offseason trade is the only chance they'll have at a fresh start next season.

Players on struggling teams going through regime changes might want to play somewhere with more stability. Younger players who are having a hard time reaching their potential can also benefit from playing elsewhere.

Let's look at a few players who are 25 or younger who would most benefit from playing for new teams next year.

The New York Jets have a difficult decision to make at quarterback this offseason. For Sam Darnold, it may be best for his career if he finds a new team to play for in 2021.

With the No. 2 overall pick in the 2021 NFL draft, the Jets will have the opportunity to take a top-tier quarterback like Ohio State's Justin Fields. If that happens, then Darnold could become an appealing trade target for other teams.

At 23, Darnold has already played under two head coaches and has had little stability around him during his three years in the NFL. Although he has shown flashes of his talent with the Jets, they've gone just 13-25 with him as the starter, while he has completed less than 60 percent of his passes for 45 touchdowns and 39 interceptions.

A fresh start on a team with a more established offense is what Darnold needs to turn his career around. The Jets will likely spend much of 2021 adjusting to a new offensive system, and that could mean more hiccups that hurt Darnold's development.

ESPN's Rich Cimini reported new head coach Robert Saleh and offensive coordinator Mike LaFleur see "untapped potential" in Darnold, suggesting that it's not a guarantee the Jets take a QB with the No. 2 pick.

However, a new team is probably what Darnold needs more than anything if he is going to find NFL success.

The Atlanta Falcons could make a lot of changes this offseason after hiring a new general manager and head coach. That could include trading several key contributors, such as cornerback Isaiah Oliver.

Atlanta drafted Oliver in the second round in 2018, and he seemed like a solid fit in Dan Quinn's defensive system given his length and ball skills coming out of Colorado. However, Oliver hasn't made much impact on Atlanta's defense, coming up with just one interception and two forced fumbles over the last three years.