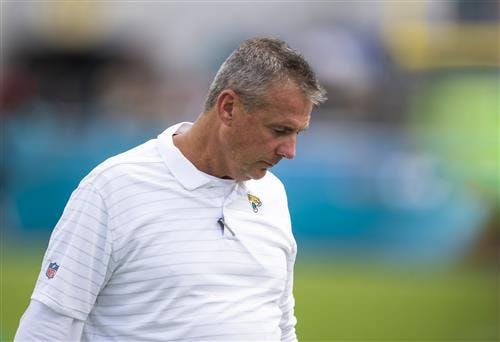 The Jaguars’ coaching staff figures to look pretty different next year. Offseason firings are “inevitable” at this point, according to sources who spoke with Jason La Canfora of CBSSports.com.

Trevor Lawrence has yet to live up to his billing in Jacksonville, prompting some internal debate about whether the Jaguars should replicate his system from Clemson. Heading into today’s game, the No. 1 overall pick had completed just 58% of his throws for 1,983 yards and eight touchdowns against nine interceptions. His work on the ground — 37 carries for 169 yards and two scores — hasn’t been enough to offset the bad reads, nor has it approached his rushing work at Clemson. Lawrence, playing against lesser defenders in the NCAA, managed 766 rushing yards and 17 touchdowns between 2019 and 200.