How much has a career year changed Aaron Judge's contract value this winter?
ESPN | Sep 27 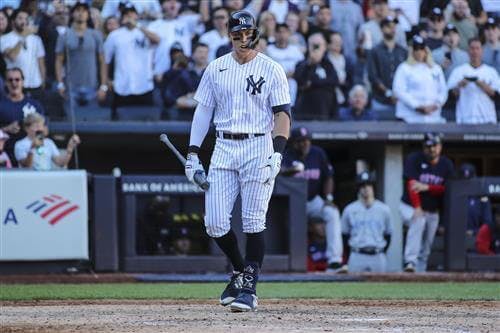 On the eve of the regular season, Aaron Judge was offered a seven year, $213.5 million contract from the New York Yankees. The consensus at the time was that he was worth a bit more than that, but that it was a fair offer with a hometown discount baked in. Judge, though, turned it down, opting to bet on himself -- and it has worked in a huge way.

In late May, during Judge's hot start to the season (.307/.381/.664 in 156 PA at that point), I wrote that his expectations should now be well north of the Yankees' preseason offer of $213.5 million, even getting lucky with a line about Judge potentially deserving around $300 million if he hit 60 home runs this year.

If Judge's hot start has been followed by the best full season in almost two decades, how far north should his contract expectations be now? Is $300 million now the expectation?

We polled more than a dozen MLB executives, agents and insiders to find out.

Here are the 14 predictions from lowest to highest total dollars committed:

And even more interesting, of the nine respondents to project a team Judge will end up with, four said he will stay with the Yankees, two have him going to the Mets, two said the Giants and one said the Giants or Dodgers. (More about that later.)

The contract guesses are pretty symmetrical, with one standout at the top (I wouldn't call it an outlier) and two at the bottom. These average out to 8.6 years and a hair below $320 million, which perfectly averages the two median responses.