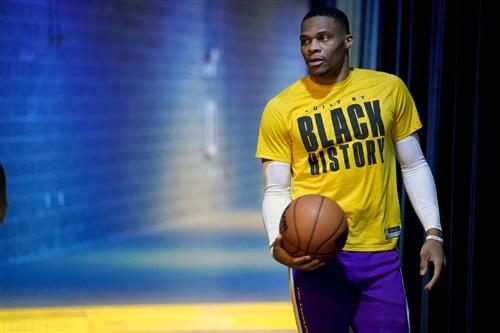 The Los Angeles Lakers badly want you to believe that they might not trade Russell Westbrook. They've on multiple occasions leaked an unwillingness to attach draft capital to Westbrook if that's what it takes to get rid of him. A major component of their head-coaching search was seemingly each candidate's plan to make the most of Westbrook. When Darvin Ham was ultimately hired, he praised the former MVP endlessly. "Don't get it messed up, Russell is one of the best players our league has ever seen, and there's still a ton left in that tank," Ham said. "I don't know why people tend to try to write him off."

Nothing a team says at this time of year should be treated as gospel. Remember, the first time Westbrook was traded, the process began with then-Rockets czar Daryl Morey emphatically declaring that he would not trade Chris Paul. "Tweet that I said that," Morey told ESPN's Zach Lowe. "Print it. Tweet it twice." The Finals haven't even ended. Teams are still negotiating through the media. Perception is reality right now. What the Lakers are saying does not guarantee that Westbrook will return to the team next season.

But it doesn't guarantee that he won't be, either. To be absolutely clear, he shouldn't be. As evidence for that I point to … literally everything that happened to the Los Angeles Lakers during the 2021-22 season. Rarely are absolutes warranted in team-building, but this is an exception: If Russell Westbrook is the starting point guard for the 2022-23 Los Angeles Lakers, they will not win the championship. End of story. Even in the absolute best-case scenario where a humbled Westbrook embraces the all-around role the Lakers envisioned for him, his $47 million salary is an anchor weighing down this roster. The Lakers had 10 minimum salaried players on their roster last season. We're watching players like Grant Williams, Jordan Poole and even Draymond Green struggle to stay on the court in the Finals right now, and the Lakers are supposed to build an entire rotation off the scrap heap? Even the perfect three-man trio isn't enough by itself to win a title. LeBron James, Anthony Davis and Westbrook are far from perfect. If the Lakers can't turn Westbrook into multiple contributing role players, they cannot win the 2023 championship.

Of course, it's not entirely clear that the Lakers are prioritizing the 2023 championship. If they were, they might've already traded Westbrook. There was reportedly an offer on the table for John Wall at the deadline that would have been based around a pick swap rather than the Lakers surrendering a selection outright. They chose not to take it. After the deadline, Lakers general manager Rob Pelinka claimed that there was alignment between him, James and Davis about the team's inactivity at the deadline. ESPN's Dave McMenamin reported almost immediately that this was "totally false." That possible divide between Klutch Sports, the agency that represents James and Davis, and the Lakers themselves, is where the interests of these parties start to diverge.

James is 37. He doesn't have that many NBA seasons left and would like to continue winning championships while he still can. But the executives building a roster around him? They'd like to stick around for a while. Doing so means more than just ensuring a well-stocked cupboard of assets to rebuild with after James is gone. It means ensuring that you have a job at all when that time comes. And so, they've tried to spin the Westbrook deal to anyone who would listen as a move engineered by Klutch. While they seemingly influenced the decision, it must be noted that players and agents cannot make trade calls on behalf of teams. The Lakers themselves had to agree to make the deal, and the executives who made it known that they can be held accountable for it. If Jeanie Buss is willing to fire her own brother, she'll certainly fire her other executives. Blaming LeBron is an act of self-preservation in part because he can't be fired. Good luck convincing a 37-year-old billionaire that you've traded him to Indiana for a couple of draft picks.

If he's not happy, he can just leave when he becomes a free agent next summer. Davis can escape a year later. As of next summer, the last remnant of the Davis trade will be a single first-round pick owed to New Orleans in either 2024 or 2025. If the Lakers want to rebuild from there, they can do so relatively cleanly, and perhaps even get a head start by dealing Davis. Things get harder once you've committed extra first-rounders to separate, win-now trades. Of course the front office is scared to make such a trade. Get them wrong and they'll get replaced. It's simply easier to act like it was all LeBron's fault. They'll totally fix it once he's gone. After all, their track record before he arrived was spotless.