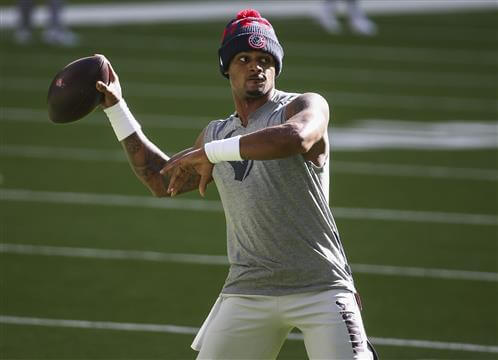 The Houston Texans haven’t really said much about in regards to Deshaun Watson after multiple women came out and accused him of sexual misconduct and assault.

In fact, the team is reportedly “slowly moving on” from him, as ESPN’s Jeremy Fowler said Sunday on SportsCenter that the Texans signing of Tyrod Taylor and drafting of Davis Mills signals the team is ready to move on:

“Teams I’ve talked to around the league are taking notice that the Houston Texans seem to be slowly moving on from Deshaun Watson because they have their bridge quarterback in Tyrod Taylor and they have their developmental draft pick in Davis Mills, a quarterback I’m told they are very high on with his instincts, his smarts and his big arm.

And so, a couple of months ago, the Texans were turning down everybody who was calling them about Deshaun Watson. Carolina was willing to give them the world; they said no. They’ve been far less committal recently. They don’t know when Watson’s even going to be cleared to play. The league will consider putting Watson on the Commissioner’s Exempt List later this summer if his case is still going on.”