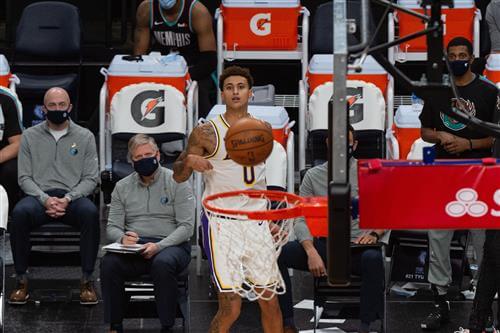 The San Antonio Spurs had a franchise first this season, as they missed the postseason for consecutive years for the first time in the history of the organization. This offseason, they will have some difficult decisions to make as that is a streak they will want to snap following the 2021-22 season. One of them could be a major roster move and Los Angeles Lakers forward Kyle Kuzma could be an intriguing potential target.

San Antonio has a good core in place headlined by point guard, Dejounte Murray. Keldon Johnson, Lonnie Walker IV, and Devin Vassell are also part of an intriguing young core that Gregg Popovich and company have put together. However, they could use someone with some experience, especially on the wing, with DeMar DeRozan heading into free agency.

DeRozan was tasked with a new role this season with the Spurs and he excelled, turning into their lead playmaker from the power forward position. Replacing him will not be easy, but one player they could target to help fill the void in the front-court is Kuzma.

Kuzma has had some flashes, but with reports popping up that he doesn’t get along with LeBron James, his time in Los Angeles could be coming to an end sooner rather than later. The Spurs, always looking for a bargain and with a great development staff, could be a great landing spot for Kuzma.

Let’s take a look at how a swap for Kyle Kuzma could look between the Spurs and Lakers.

For the Spurs, this trade gives them a chance to open up playing time in their back-court. There is a bit of a logjam there when the team is healthy, so balancing out the roster this offseason makes sense.

With DeMar DeRozan possibly moving on in free agency and Rudy Gay also hitting free agency, San Antonio also needs help on the wing. Kuzma could help fill that void at the forward position given his scoring prowess.