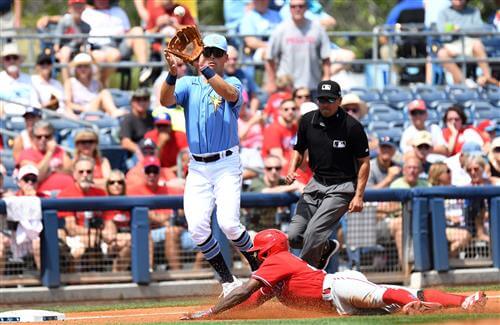 The NBA is making strides toward a potential return. In Europe, professional soccer leagues have already restarted, with more to come. But the 2020 MLB season remains in serious jeopardy.

Buster Olney of ESPN reports some MLB owners are “perfectly willing” to cancel the 2020 season amid ongoing negotiations, also noting how some organizations have already cut employee payments and released minor league players:

Sources say there is a group of owners perfectly willing to shut down the season, to slash payroll costs and reduce losses, and the disparate views among the 30 teams have been reflected in the decisions to fire and furlough. The Pirates’ Bob Nutting used the shutdown as an avenue to suspend team contributions to employee 401K plans — savings best measured monthly in the tens of thousands of dollars rather than the millions that would actually be difference-making for a franchise probably worth at least $1 billion. The Oakland Athletics’ John Fisher decided to eliminate the $400 weekly salaries of minor leaguers, which might save the franchise about the amount of the team’s unpaid stadium rental bill. On the other hand, clubs such as the Tigers, Padres and Royals demonstrated greater humanity, with the Royals’ John Sherman deciding to pay his minor leaguers.