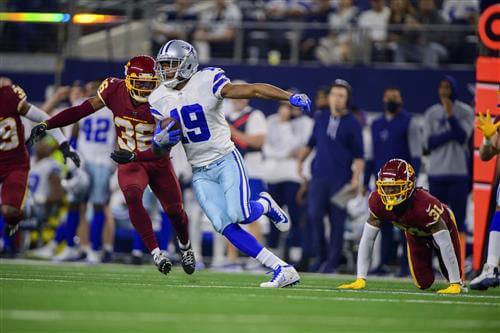 The Dallas Cowboys roster won’t look the same in 2022 and for star wide receiver Amari Cooper, frustration from Jerry Jones could result in a blockbuster offseason trade.

Cooper lived up to the price tag from the 2018 trade that sent him to Dallas. Acquired for a 2019 first-round pick, later spent on safety Johnathan Abram, the Cowboys are certainly pleased with the returns. But since signing Cooper to a $100 million contract, things haven’t worked out quite as nicely.

The 6-foot-1 receiver made the Pro Bowl in his first two seasons with the Cowboys and is a go-to weapon for Dak Prescott. But reports of frustrations from the Cowboys’ front office emerged in July 2021 and Cooper didn’t do himself any favors by missing time as an unvaccinated player.

With Dallas in need of cap space and wanting to adjust its roster, a move is possible. Let’s examine the best landing spots for a potential Amari Cooper trade.

The Jacksonville Jaguars enter the offseason with ample cap space, more than enough to sign a star wide receiver. But there’s a problem. Chris Godwin is unlikely to leave the Tampa Bay Buccaneers, Michael Gallup is recovering from a torn ACL and a reunion with Allen Robinson is a massive risk. That leaves trade options and Cooper makes for a compelling target.

Owed $20 million fully guaranteed this fall, Jacksonville could easily absorb Cooper’s contract. While he isn’t the most durable wide receiver, dealing with something every year, he almost always finds a way to play. That level of consistency, paired with Cooper’s ability to get open in all areas of the field would make him a worthwhile option for Jacksonville.

This is also a great move for Trevor Lawrence. The rookie never had a true No. 1 option and it’s fair to argue he lacked a competent No. 2 receiver. Cooper would draw 130-plus targets per season with the Jaguars and he could easily turn that into 90-plus receptions and 1,100 receiving yards.

If Cooper’s future isn’t in Dallas, a return home would likely appeal to the 27-year-old. He grew up in Miami, playing football at Miami Northwestern Senior High School and became a star on the gridiron. After years spent in Alabama and Texas, there would be something special about a Miami reunion.

The Dolphins could create a version of the Cowboys’ passing attack, viewing Jaylen Waddle as their own version of CeeDee Lamb. If tight end Mike Gesicki is re-signed, Miami would surround quarterback Tua Tagovailoa with three great weapons that can make plays after the catch. For a passer who makes quick, accurate throws and is dependent on his teammates’ YAC ability, it becomes a nice fit.

Sliding Cooper’s contract onto the cap sheet wouldn’t be much of a problem and the Pro Bowl receiver would be happy. After solidifying the aerial attack, the Dolphins could spend the rest of their offseason improving the offensive line and run game.