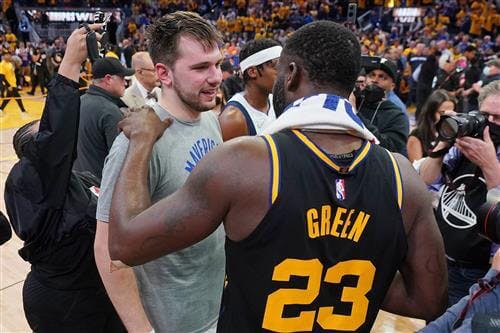 It’s all about the future for the Dallas Mavericks. Yes, the team is fully capable of going on a deep playoff run this year, but with Luka Doncic being just 23 years old, the team is built for the future. However, the future may not be 10 years from now. It could be just two or three.

With Tim Hardaway Jr. and Davis Bertans on the books, the Mavericks are one or two quick trades away from creating enough space for a max contract. Next offseason, they could potentially be players in free agency looking to add another star alongside Doncic.

There are a bunch of players who could be available to them in free agency, but sources who spoke to Sean Deveney of Heavy.com mentioned one in particular – Golden State Warriors star Draymond Green. Dallas was named as one of the teams he could potentially want to join if he were to leave the Warriors.

NBA
Jordan Poole is about to get paid, and he’s worth every penny to the Warriors

“He does not want to, but if you ask around, I think there is a sense that he would,” a Western Conference executive told Deveney. “There is a limit on how much they’re going to spend to keep this thing together and because they have young guys are just about every position, they’re approaching it like there’s no one outside of Steph that they have to keep. Look, it would suck for them if Draymond left, it would suck to call up Steph and have to tell him, but Draymond has made it clear he is about player power. If he gets a big offer from Detroit as one example or maybe Dallas or the Lakers, somewhere he would like to play? He is not going to be shy about leaving. He understands this business.”