Does A Kyrie Irving-Russell Westbrook Swap Make Sense For Both Teams?
Heavy | May 24 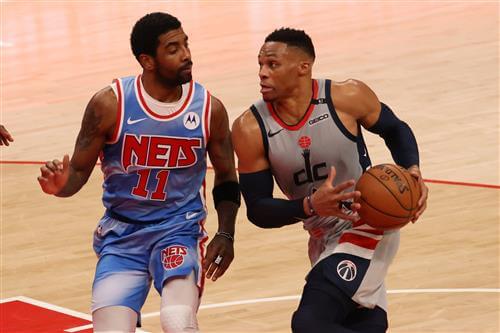 News broke this week of a secret meetup at the NBA Draft Combine between the Los Angeles Lakers general manager Rob Pelinka and Brooklyn Nets general manager Sean Marks. Both teams are coming off of disappointing seasons and have some imminent roster moves that need to be made.

At the time it was first reported, Adam Zagoria of the New York Times shared to Twitter about the meeting. The purpose of the meeting was undetermined.

“Nets GM Sean Marks and Lakers exec Rob Pelinka had a meeting at the Marriot Marquis this week at the NBA Combine,” Zagoria said via his Twitter account on May 21. “Unclear what they discussed. Potential trade? Dinner plans? Comparing superstar headaches?”

The New York Daily News released an article on what it would take for the Nets to acquire LeBron James from the Lakers on March 22, but that wasn’t the only possible move between the Lakers and Nets.

The meeting between Marks and Pelinka led to speculation — wild, maybe — that they could be talking about a major trade, perhaps one that would send Kyrie Irving to Los Angeles for Russell Westbrook. Is it feasible?

On May 23, a Western Conference NBA executive told Heavy.com’s Sean Deveney that the deal could become a real possibility.

“It is trading one problem for another problem but if you are the Lakers, you can live with that. The Nets are reluctant to commit to Kyrie for a long term because, obviously, they do not know how much he’s gonna play. But the Lakers, they’re more willing. Kyrie and LeBron have their own relationship, they would be happy to get back together. And remember, AD and Kyrie have a relationship, too. Kyrie was recruiting Davis to go to Boston three years ago, so they have their connection.” said the Western Conference executive.