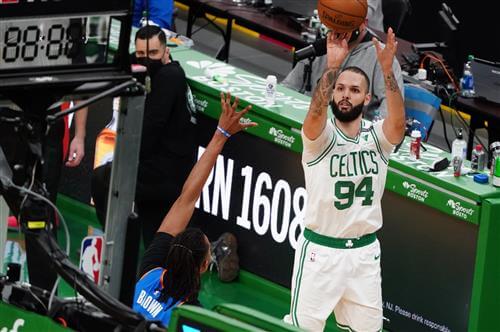 Evan Fournier’s return to Boston was perceived by many to be a near-sure thing. Acquired at the trade deadline back in March, the Celtics used a hefty chunk of their Gordon Hayward trade exception in order to acquire the sharpshooting wing from the Orlando Magic. A near 20-points per game scorer at his peak, the Frenchman looked to be much more than a half-year rental, especially with Boston owning his bird rights. However, every team has its breaking point when it comes to contract negotiations, and it looks as if the Celtics may have just reached there’s.

According to the Boston Herald’s Mark Murphy, “negotiations between the Celtics and Evan Fournier are close to stalling, with the team unwilling to meet the valuable wing player’s asking price of $80 million over four years.”

For what it’s worth, that salary number aligns — albeit at the high-end — with the rumored price point that has circulated Fournier free agency talks over recent months. One anonymous executive told HoopsHype back in June that the feeling in NBA circles is that Fournier would seek a contract worth between $15-20 million per season, in line with the $17.5 million he made this past season.

The Celtics would still likely prefer to hammer out a deal with Fournier. With that said, don’t look for the team to go beyond their means in order to retain the 28-year-old, especially after recently acquiring guard/forward Josh Richardson from the Dallas Mavericks.

If Boston and Fournier don’t find even ground before the free agency market officially opens up on Monday, August 2nd, at 6 p.m. ET, they could be in danger of losing his services to an Atlantic Division foe, via SNY’s Ian Begley.