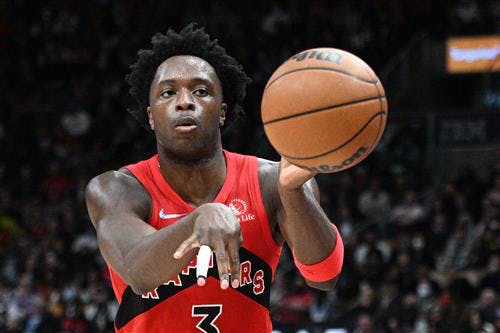 While the summer trade period has died down as we approach training camp, it's never too early to explore what deals may take place during the 2022-23 regular season.

After we watched All-Stars such as Donovan Mitchell, Rudy Gobert and Dejounte Murray switch teams this offseason, which big names could be on the move before the February deadline?

With the Brooklyn Nets looking unstable, the Los Angeles Lakers seeking a point guard upgrade and the Chicago Bulls in danger of being left behind in a loaded Eastern Conference, these blockbuster trades should all satisfy the following teams.

After ranking 26th in total defense last season with a 113.7 rating, the Hawks knew they needed to upgrade on that side of the ball. The trade for Dejounte Murray was a good start, but why stop there?

Anunoby is one of the NBA's better wing defenders, ranking in the 88th and 71st percentiles the past two years, per Cleaning the Glass. Moving Capela also opens the starting center job for Onyeka Okongwu, a 21-year-old with elite defensive potential.

The move also brings in a first-rounder after Atlanta traded three to acquire Murray and prevents the Hawks from having to work out a long-term deal with Hunter, who will be a restricted free agent next summer.

For the Raptors, this move makes the team bigger, longer and adds a true center next to Pascal Siakam. Hunter has battled injuries throughout his career but can still be a valuable two-way wing, and Toronto can match any offer he receives next summer.