Are the New York Rangers the front-runner for Jack Eichel?
The Athletic | May 11 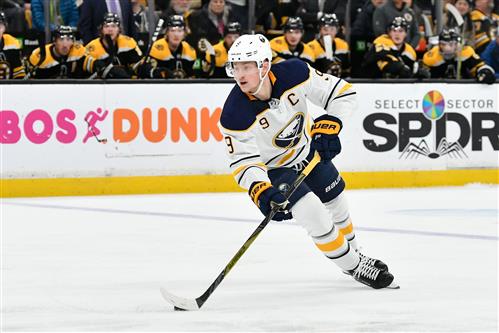 Jack Eichel has some “thinking to do in this offseason,” and the Buffalo Sabres star doesn’t sound like his focus will be on staying with his current team.

On Monday, he vented his frustrations with the organization and specifically how they’ve handled his injury.

With a no-trade clause in his contract set to kick in after the 2021-22 season, this offseason seems like the key time to trade the center. After all, the Sabres don’t want to end up in a situation where they have to take lower value in a return because the player and the buyer have all the leverage (See: Hall, Taylor).

So to start to evaluate where Eichel could be traded, we asked The Athletic’s NHL staff to evaluate their team’s level of interest in Eichel and what they could offer in a package.

New York Rangers: The Rangers have a whole stocked cupboard of young talent from which to deal, but there are untouchables — Alexis Lafrenière, Adam Fox and Kaapo Kakko among them. I do think they’re scared off a bit by Eichel’s injury now, combined with his cap hit. Pre-injury, they’d have been all-in. -Rick Carpiniello

Will test the market

Arizona Coyotes: If you’re Arizona why not take a run at Eichel? The Coyotes are again looking for a fresh start after an unsettling season on and off the ice, and Eichel instantly becomes the franchise center they’ve never had. There’s room financially to make it fit. Plus at 24, Eichel is right in the wheelhouse with the rest of the young talent the Coyotes have. Give up Clayton Keller to make this happen? Again we ask, why not? -Scott Burnside

Boston Bruins: The Bruins would start their offer with Jake DeBrusk and their first-round pick for either 2021 or 2022. Secondary prospects include Jakub Lauko and Mason Lohrei. They do not want to trade David Pastrnak or Charlie McAvoy. -Fluto Shinzawa

Calgary Flames: I don’t see a move happening that doesn’t include Matthew Tkachuk going to Buffalo in return for Eichel. Johnny Gaudreau will only have one year left on his deal, and Sean Monahan isn’t significant enough. We could discuss other pieces, but realistically Tkachuk would be the significant piece to get that done. The Flames could have a top-10 pick at this year’s draft to use in a package, too. Or prospects such as Connor Zary or Jakob Pelletier if they needed further sweetening. -Hailey Salvian