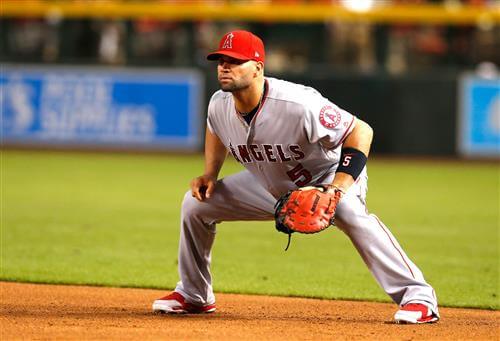 On Thursday, the Los Angeles Angels designated future Hall of Famer Albert Pujols for assignment. He is in the final season of his 10-year, $240 million contract, and club decided they can better use his roster spot on another player. The Angels are currently in last place in the AL West at 13-16.

"The Angels Organization proudly signed Albert Pujols in 2011, and are honored that he has worn an Angels jersey for nearly half of his Hall-of-Fame Career," Angels owner Arte Moreno said in a statement. "Albert's historical accomplishments, both on and off the field, serve as an inspiration to athletes everywhere, and his actions define what it means to be a true Superstar. Since his Rookie of the Year Season in 2001, Albert and his wife Deidre have generously given their time and resources to countless charities throughout the world. We are thankful to the entire Pujols Family."

The 41-year-old Pujols is hitting .198/.250/.372 with five home runs this season, and he's been a below-average hitter dating back to 2017. Once he clears waivers -- Pujols will undoubtedly clear waivers because no team is taking on his $30 million salary -- and is released, any team can sign him for the prorated portion of the league minimum.

Here are five teams who might be interested once Pujols hits the open market, but one possibility stands out as the likeliest.

It's hard to ignore the Tony La Russa connection, right? La Russa managed Pujols during his entire 11-year stint with the Cardinals, and the White Sox have been hammered with injuries (Eloy Jiménez, Luis Robert, etc.). The problem? Pujols doesn't play the outfield, and neither does rookie Yermín Mercedes, who is tearing the cover off the ball and locked in at DH. José Abreu won't be displaced at first base either. Hard to see a fit, but don't rule out La Russa going to bat for his guy.

The Reds lost first baseman Joey Votto to a broken thumb Wednesday and he is expected to miss several weeks. Cincinnati could go with Alex Blandino, Kyle Farmer, or Mike Moustakas at first base, though none are ideal solutions (moving Moustakas to first would require moving Jonathan India or Nick Senzel to third, and open a hole elsewhere).