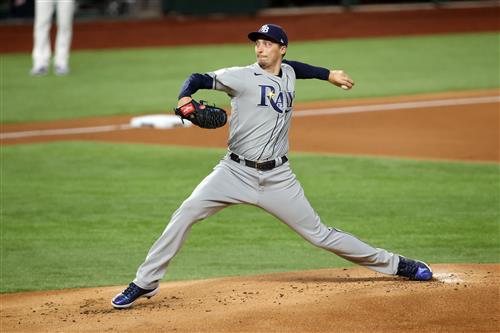 A hot stove season that's been slow to warm up thus far was rocked to life Monday with a report the Tampa Bay Rays are open to trading ace Blake Snell.

Outside of Trevor Bauer in free agency, Snell is now likely the best pitcher available this winter. The Rays will undoubtedly ask for a lot given Snell's on a fairly friendly contract - he's owed $39 million over the next three seasons. But this is a former Cy Young winner with a recent track record of performing in the postseason, so there will be no shortage of suitors.

Here are five teams that should step up and trade for Snell.

It's easy to see how Snell fits with the Braves. Atlanta's rotation in 2020, save for Max Fried, was a weak spot. The team's 5.51 ERA was the worst in the National League, and the staff accrued just 2.0 WAR, per FanGraphs, good for 26th overall. Snell's a significant upgrade over Drew Smyly, who the Braves signed last week, and he'd allow Smyly or Kyle Wright to work as a swingman if needed. A rotation headed by Snell, Fried, Ian Anderson, and a healthy Mike Soroka would be one of the NL's best.

Tampa Bay would likely command either Cristian Pache or Drew Waters to headline a package for Snell. After coming agonizingly close to the World Series in October, this is the kind of swing Atlanta almost has to take.

Death, taxes, and the Angels desperately needing to add pitching to help Mike Trout. Snell would be a boon for the Halos, immediately providing them with the ace they've sought for years.