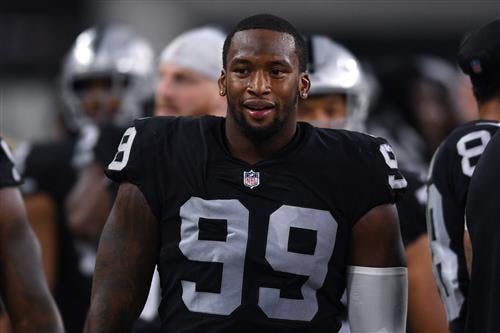 The trade market will be relatively quiet in the early stages of the 2022 NFL season, but the rumor mill is destined to pick up speed as September rolls into October.

Let's be clear: It's definitely not time to blow up a roster. Although snap reactions are enjoyable for both fans and media, a one-game sample size is a terrible way for front offices to manage a team. Executives must be more patient than us.

Still, we know that trades are coming soon enough.

The following deals are focused on players who are either established trade candidates or currently holding minor roles and perceived playoff contenders with voids to address.

All offseason, any number of analysts pointed to the Green Bay Packers' unproven receiving room as a major concern. This isn't new.

The opening game against the Minnesota Vikings didn't do much to calm those concerns. Rookie wideout Christian Watson dropped a would-be touchdown from Aaron Rodgers, and veterans Sammy Watkins and Randall Cobb hardly made an impact. Running back AJ Dillon paced the Packers in receptions (five) and yards (46), which is certainly not ideal in both production and execution.

Yes, both Watson and fellow rookie Romeo Doubs should develop as the season progresses. The return of top wideout Allen Lazard and offensive linemen David Bakhtiari and Elgton Jenkins will help the passing game, too. Again, we already knew the situation at hand.

But an upgrade still looks necessary.

Green Bay could look to the New York Giants for Darius Slayton. Not only did he recently agree to an incentive-laden pay cut, but Slayton was also a healthy scratch in Week 1. He's clearly not a Plan A option for the Giants and wouldn't cost more than a speculative late-round pick.

However, the 25-year-old has 124 catches for 1,830 yards and 13 touchdowns in three NFL seasons. Slayton would provide a mix of youth and experience that Green Bay lacks outside of Lazard.