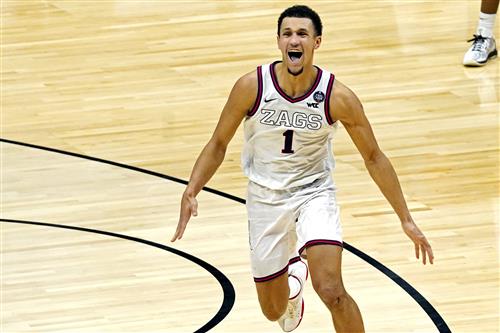 Even before entering college, Gonzaga Bulldogs star Jalen Suggs has already been ranked as one of the top prospects in the upcoming NBA draft class of 2021. The 6-foot-4 guard further established that by leading the Bulldogs to an undefeated regular season. Now, the legend of Suggs grew even further after he banked home an insane game-winning three-pointer in an epic Final Four showdown against the UCLA Bruins to propel Gonzaga into the National Championship game.

Possessing a dynamic offensive game, the Bulldogs stud has a quick first step and can be a threat to score from inside and out. His excellent vision and high basketball IQ also makes him an elite playmaker. Several teams will definitely salivate at the chance of drafting Suggs and he would be a seamless fit on any roster with the way could play both guard positions in the next level.

With that, here are five teams that should select Jalen Suggs in the 2021 NBA draft:

So let’s just get this out of the way. I’m putting on my Warriors fan hat first. As a Dubs fan, I want to see Jalen Suggs running with Stephen Curry and Klay Thompson in the Golden State backcourt. I’ve been imagining this scenario ever since I watched his highlight reel even prior to the start of his college career and that hasn’t wavered with the way he has led Gonzaga this season. His epic game-winner just made me want it even more.

Getting the chance to pick Suggs, however, highly depends on where the Minnesota Timberwolves draft pick falls in the lottery. Should that pick land within the top-3, it conveys to the Timberwolves and they instead will get Minny’s 2022 pick.

Now, biases aside, should the stars align and Suggs somehow falls into their laps, the Gonzaga standout likely wouldn’t get as sizable a role in Golden State as he would get with other teams for his first few seasons at least. With Stephen Curry and the returning Klay Thompson manning the backcourt, he’ll surely play off the bench. Still, he could still get a lot of run with the Dubs easing Thompson back, especially coming off two very serious injuries. But as the Splash Brothers get older, the Warriors could eventually hand the keys over to Suggs as their next franchise star.

The Oklahoma City Thunder loaded up the gas tank in the 2020 off-season when they traded away Chris Paul and Steven Adams, and let Danilo Gallinari walk in free agency. Thunder general manager Sam Presti has filled up their cupboard with a load of draft picks over the next decade. With one of the worst records in the West, there is a high chance that they will get an opportunity to select Suggs in the upcoming draft.

Oklahoma City holds their own first round pick, so they won’t have any trouble of landing high in the lottery with their current standing in the 2020-21 NBA season. They have already shut down Al Horford for the rest of the season and star guard Shai Gilgeous-Alexander is projected to be sidelined until mid-April, which should further send them down in the league standings.

Should the Gonzaga stud land in OKC, Jalen Suggs would be an ideal fit in the back court with Gilgeous-Alexander. The two combo guards would be a deadly duo for the Thunder for many years to come. They can play both guard positions and can score from anywhere on the floor.