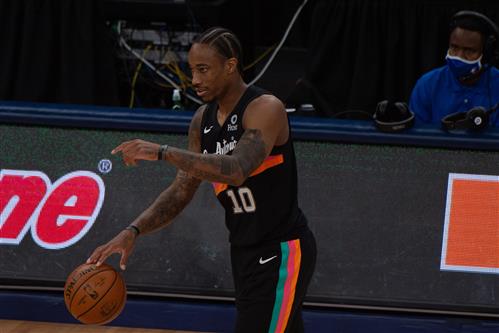 The 2021 NBA trade deadline is now less than two months away, although a blockbuster four-team James Harden trade has already caused ripples throughout the league.

Harden joining the Brooklyn Nets means other title contenders may now be pressured to upgrade their rosters while the Nets themselves look to build back some depth.

Bradley Beal has become the name to watch as the league's leading scorer is being wasted on the 3-9 Washington Wizards. He's far from the only big name who could be moved, however.

With activity already underway, here are some more transactions to look out for as the deadline draws closer.

Brooklyn Nets Use New Exception to Get a Center

Pairing James Harden with Kevin Durant and Kyrie Irving seems like a cheat code on offense, although stripping the team of Jarrett Allen, Taurean Prince and Caris LeVert has severely hurt Brooklyn's defense and depth.

Since trading for Harden, the Nets have a defensive rating of 119.2, which ranks next-to-last in the NBA over that span.

While one of those meetings was against a strong Milwaukee Bucks team, the Nets dropped two games to the Cleveland Cavaliers (who were missing Kevin Love), gave up 124 points to a Miami Heat squad without Jimmy Butler or Tyler Herro and allowed Nikola Vucevic of the Orlando Magic to light them up for 34 points on 63.6 percent shooting.

Starting center DeAndre Jordan (5.8 points and 6.8 rebounds per game) hasn't been this ineffective in nearly a decade and will get destroyed if he's asked to defend Joel Embiid, Bam Adebayo or Giannis Antetokounmpo in a playoff series.

The Nets can't trade a first-round pick for the next eight drafts, which means they're limited on upgrade opportunities.

But JaVale McGee is one option. The 33-year-old is averaging 8.2 points, 6.2 rebounds and 1.1 blocks in just 16.8 minutes per game for the Cavaliers but has fallen out of the rotation behind Andre Drummond and Allen.

The Nets were granted a $5.7 million disabled player exception from Spencer Dinwiddie's season-ending ACL tear, and they could use it to absorb McGee's $4.2 million salary. Sam Amico of FortyEightMinutes reported that the Nets and Cavs have already met twice to discuss a trade for the big man.

Brooklyn could also use its exception to trade for fellow veteran centers like Ed Davis, Nerlens Noel or Bismack Biyombo.

With the Houston Rockets in the middle of a complete makeover, P.J. Tucker is likely the next veteran out the door.

Houston hasn't been in any hurry to trade the 35-year-old, however, even offering him a contract extension, per The Athletic's Kelly Iko and Sam Amick. They also noted that "teams have already made a number of phone calls to Houston about potentially acquiring Tucker."

The three-and-D power forward with an expiring $8 million contract should be one of the league's easiest veterans to move. He's played a key role on playoff teams in Houston and Toronto the past five years, able to start as a floor-stretching big or serve as a primary reserve.

Since Tucker has refused to sign any extension Houston has offered, a trade seems inevitable.

The Minnesota Timberwolves have "maintained contact" with the Rockets about Tucker, per The Athletic's Jon Krawczynski. While they have a need at power forward, they're also dead last in the West with a 4-11 record. Giving up anything of value for Tucker with the season slipping away seems questionable.