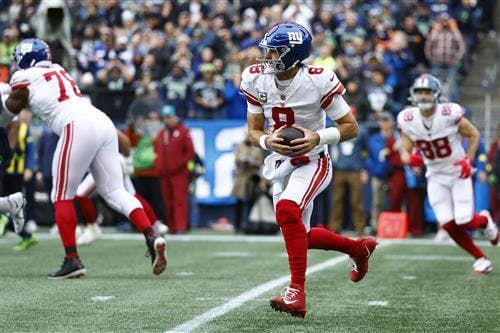 With Week 10 in the rearview, every NFL team has played at least nine games. While we're not quite in the homestretch of the playoff race, several have emerged as Super Bowl favorites.

The Kansas City Chiefs, Miami Dolphins, Minnesota Vikings, New York Giants and Philadelphia Eagles all have seven wins or more. While they're not yet locks to make the postseason, they are more likely than not to get spots in the tournament.

However, midseason favorites don't always emerge as Super Bowl participants. Just last season, for example, the Cincinnati Bengals sat at 5-4 after Week 10 but went on to represent the AFC in Super Bowl LVI.

NFL
NFL coaching hot seat: Who's under the most pressure entering stretch run?

Here, we'll examine five dark-horse teams that could sneak into the playoffs and make realistic runs at the championship. Specifically, we'll be looking at squads that aren't leading their respective divisions and face Super Bowl odds of +2000 or longer, according to DraftKings. We'll dive into why these teams are dark horses at midseason and why they shouldn't be written off in January.

While it feels odd to view the defending AFC champion as a dark horse, the oddsmakers don't seem particularly high on Cincinnati. The Bengals do trail the 6-3 Baltimore Ravens in the AFC North, and they've struggled with consistency all season.

Cincinnati got off to an 0-2 start, lost the first head-to-head meeting with Baltimore and got steamrolled by a bad Cleveland Browns team in Week 8. It's also missing star wide receiver Ja'Marr Chase, who is dealing with a hip injury.

Yet Cincinnati is sitting with the same record it had at this point in 2021. Quarterback Joe Burrow showed last year that he can get white-hot down the stretch, and assuming Chase does return—he avoided injured reserve—it could happen again.

Plus, the Bengals finally got Joe Mixon and the ground game going in Week 9 before heading into their bye. Cincinnati rushed for 241 yards against the Carolina Panthers, marking only the third time it has topped 100 yards this season.

The defense, which ranks a solid 10th in yards allowed, is set to get standout tackle D.J. Reader (knee) back. While cornerback Chidobe Awuzie recently landed on injured reserve with a knee injury, the return of Reader (43 tackles, two sacks last season) will be huge.

Aside from the Chase and Awuzie injuries, the majority of key contributors are healthy. Perhaps more importantly, Cincinnati knows what it takes to overcome a tough situation.

"We're not panicking," Burrow told reporters after losing in Cleveland. "We know what went wrong in each game."

The Bengals beat the AFC's No. 1 and No. 2 seeds en route to Super Bowl LVI. As long as they can climb into a playoff position, they'll be an opponent that no team wants to face in the postseason.