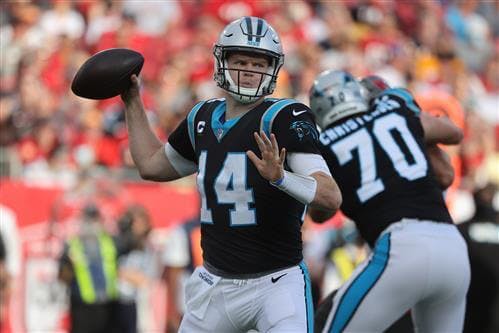 Sam Darnold was the No. 2 quarterback on the field for the Carolina Panthers behind Baker Mayfield as they opened up their preseason against the Washington Commanders on Saturday.

It’s not a surprise. Even after acquiring Mayfield late in the offseason, the former No. 1 pick is seemingly running away with the starting job in Carolina. It has left Darnold’s future in Carolina up in the air as he enters his contract season.

With P.J. Walker and rookie Matt Corral on the roster behind Mayfield, there might not be any room for Darnold and his contract in the Panthers’ QB room.

Sure said contract could be a deterrent when it comes to teams showing interest in Darnold. But he’d still be a valuable backup quarterback should Carolina move off the former top-three pick. With that in mind, we look at four ideal trade scenarios for the struggling 25-year-old Sam Darnold.

Sam Darnold heads back to the AFC East

After a stellar rookie season, Patriots quarterback Mac Jones has hit that proverbial wall thus far in training camp. He’s struggled picking up additions to the watered-down offensive scheme Bill Belichick and Co. installed a season ago. In short, New England’s defense has dominated the former Alabama star at nearly every turn this summer. Jones has even owned up to these struggles.

“I’m going to figure it out. I always have. I always will. At the end of the day, you’re going to have your ups and downs with anything new, but I’ve learned a lot of different systems and the guys around me have too.

Bringing in Darnold wouldn’t be a case of the Patriots creating competition for Jones. He’s their unquestioned starter. Rather, it would be all about lighting a fire under the young signal caller while finding an upgrade over Brian Hoyer at QB2.

As noted above, this contract is somewhat of an issue. New England currently finds itself $4.47 million under the cap. It would require Carolina eating a whole lot of Darnold’s salary while sending a mid-round selection to the Panthers. Is that worth it? We’re not too sure.

New Raiders head coach Josh McDaniels was one of the central figures who helped them acquire Jarrett Stidham from his former New England Patriots squad. The idea was to get someone with familiarity to back up the recently-extended Derek Carr. Outside of that, Vegas has veteran journeyman Nick Mullens and undrafted rookie free agent Chase Garbers on the roster.

It’s not yet known whether the Raiders would view Darnold as an upgrade over Stidham or Mullens. What we do know is that they’ve shown interest in a player by the name of Colin Kaepernick who has not suited up in an NFL game since New Year’s Day of 2017. There’s seemingly a need here.