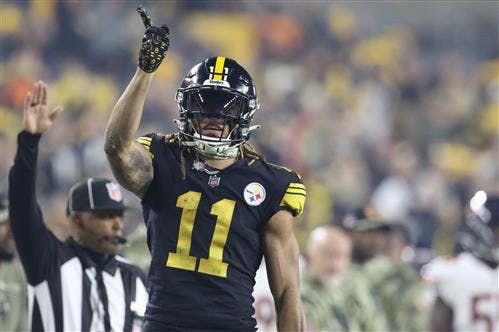 Chase Claypool has been extremely productive in his first two-plus seasons with the Pittsburgh Steelers after they made the former Notre Dame standout a second-round pick back in 2020.

That included the 24-year-old Claypool tallying north of 800 receiving yards in each of his first two seasons. Apparently, this is not enough for a struggling Steelers organization to view him as an important part of their future.

According to ESPN’s Jeremy Fowler, Claypool was the subject of trade talks during the preseason. Fowler notes that Claypool is also a name to watch ahead of the Nov. 1 NFL trade deadline.

NFL
Packers Could Be Interested In Trading For WR Chase Claypool

Still young and under team control through the 2023 season, Claypool will draw a ton of interest on the trade market. That includes contenders and non-contenders alike. In turn, Pittsburgh is said to be demanding a nice bounty in return. Below, we look at four ideal Chase Claypool trade scenarios from the Steelers.

We mean no disrespect in the direction of Darnell Mooney. He looked darn good for Chicago a season ago. Unfortunately, the youngster has struggled connecting with Justin Fields thus far in 2022. He’s recorded just 17 receptions and is catching 51.5% of his targets through six games.

With Fields continuing to go through growing pains, finding a 6-foot-4 pass-catcher would be a major boon for new general manager Ryan Poles. The second-year quarterback doesn’t have someone who boasts the catch radius as Claypool. Perhaps, Chicago offers up a second-round pick in 2023 and another high-round selection in 2024 to get this done.

Kansas City Chiefs go all in with Chase Claypool

At 4-2 on the season, it doesn’t seem that Kansas City is missing recently-traded wide receiver Tyreek Hill too much. But that’s just on the surface. New additions JuJu Smith-Schuster and Marquez Valdes-Scantling have combined for one touchdown in six games. Mecole Hardman has not stepped up at the rate Kansas City expected to open the season.