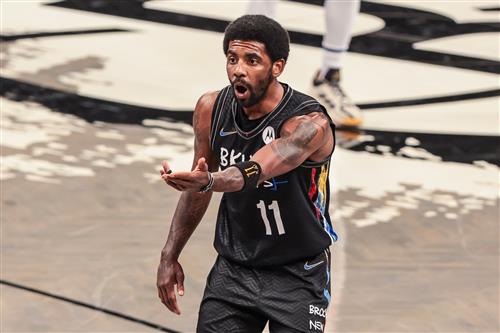 Following another drama-filled season between Kyrie Irving and his Brooklyn Nets, speculation is ramping up that general manager Sean Marks might look to trade the enigmatic point guard. The idea would be to find a more natural fit with James Harden and Kevin Durant. If that is indeed the case, let’s look at four ideal Kyrie Irving trade scenarios.

This hypothetical Kyrie Irving trade scenario is interesting in that LaVine’s contract situation with the Bulls is up in the air. There’s no telling whether he’ll be in the Windy City long-term, leading to trade rumors on a near never-ending loop. The assumption is that the high-scoring LaVine would sign an extension with Brooklyn, which would make this a coup for general manager Sean Marks and Co. Given his three-point prowess and ability to get to the rim, LaVine would be a tremendous fit next to James Harden and Kevin Durant for the Nets.

As for Chicago, the team just exhausted a ton of draft capital to acquire All-Star center Nikola Vucevic from the Orlando Magic. At least initially, the pairing with LaVine did not work. The team posted a 12-18 record after the blockbuster trade and missed out on the playoffs. The idea would be to team Vucevic up with Irving and find a nice inside-out game between the two All-Stars. Under this premise, Chicago also finds a way to retain pending restricted free agent Lauri Markkanen.

To say that things are not going swimmingly for the 76ers with Simmons as their “second option” behind Joel Embiid would be an understatement. The reigning NBA MVP finalistthrew his teammate under the bus in a big way following a terrible performance in Philadelphia’s conference semifinals loss to the Atlanta Hawks. It’s led to speculation that Simmons will be moved this summer. Although, there’s certainly questions about his trade value. Acquiring Irving would be an absolute win. He’s much better of a fit with Embiid.

With that said, Simmons’ defensive ability would work well for a Nets team that struggled in that regard a season ago (114.1 points per game against). He could play a more natural power forward spot and off-ball position next to Kevin Durant in the frontcourt with James Harden being ball-dominant. Brooklyn also gets a young sharpshooter and two first-round picks it could potentially flip with Joe Harris for another starter-caliber option.