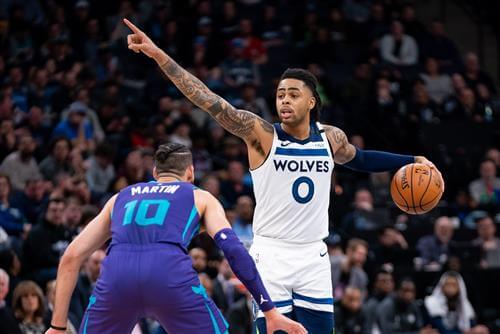 Yet another season in the NBA and yet another year of seeing the Minnesota Timberwolves at the bottom of the Western Conference standings. At full strength, the T-Wolves actually do not have that bad of a roster, but that is the thing, they are never at full strength!

This team just cannot seem to catch a break, but the good news is that Anthony Edwards is an absolute stud. This year’s first-round pick is starting to put things together and came close to winning the 2021 NBA Rookie of the Year award.

With a core of Russell, Edwards, Beasley, McDaniels and Towns moving forward, all the pieces are aligned for the Timberwolves to find success in the near future, but their ownership and management may be getting frustrated with all of the losing.

Without a first-round selection in the 2021 NBA Draft, the Timberwolves must get creative in order to reconfigure the roster around Karl-Anthony Towns and Edwards. Could this be an opportunity for a trade involving D’Angelo Russell? That remains to be seen, but something to keep tabs on in trade rumors as the NBA offseason progresses.

If D’Angelo Russell does become available in trade talks, there is no telling what kind of market he will hold since he has been injured so much, but let’s take a look at three offseason trade scenarios the T-Wolves could consider featuring D’Angelo Russell, assuming his value is still considered at an All-Star level.

The Chicago Bulls were big winners at the NBA trade deadline this year as they were able to acquire All-Star center Nikola Vucevic. With Vucevic and Zach LaVine, the Bulls now have two All-Star players, but they are still missing that one extra piece to their puzzle to finally be a consistent playoff threat.

The Bulls have expressed interest in Lonzo Ball and may look to sign him in the offseason, but the New Orleans Pelicans are expected to keep Ball long-term, which is why Chicago could turn their attention to D’Angelo Russell. Regardless, the Bulls will be a key team to watch in NBA rumors for a point guard.

When healthy, Russell is a very underrated point guard in this league and could definitely be a great third star to add next to Vucevic and LaVine, but the only question is whether or not the Bulls are willing to invest a lot into an injury prone point guard.