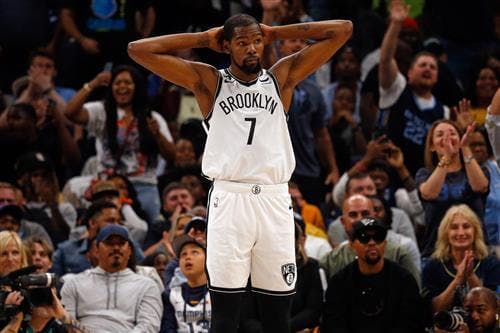 The Kevin Durant trade request dominated NBA news this offseason. However, Brooklyn Nets owner Joe Tsai was able to talk Durant down, keep him on the team, and do it without having to trade Kyrie Irving or Ben Simmons or having to fire Steve Nash and Sean Marks. All seemed well at the Barclays heading into this season. Now, though, the Nets are 1-4. If the team keeps up its poor play, can another Durant temper tantrum be far behind? To get ahead of this story that seems like it’s coming soon, let’s look at some theoretical Kevin Durant trade destinations if the superstar were to renew his desire to get out of Brooklyn.

A new Kevin Durant trade request would mean that the 12-time All-Star thinks the Nets are a sinking ship and is desperate to get out. Hypothetically, this would make him a little less picky about where he goes in a trade. The Nets still wouldn’t be able to ship him to the Pistons, but we’re going to imagine that Durant would open himself up to a few more possibilities this time around.

On the Nets’ side, the team will have to do incredibly well, bringing back young players and picks that are at least in the neighborhood of the Rudy Gobert and Donovan Mitchell trades. With Simmons and Kyrie Irving still on the roster, the trade will be a little more player-heavy, though, because a KD trade for the right pieces would allow the team to stay a mid-level contender with improved defense and a more Kyrie-centric offense.

With all that in mind, let’s look at three Kevin Durant trade destinations if he decided to re-request a trade.

As far as young players go, this is likely the best the Nets can do for Durant. In Mikal Bridges and Cam Johnson, the Nets get a ready-made young wing nucleus that automatically makes Brooklyn a 3-and-D team around Irving. A starting lineup of Irving, Simmons, Bridges, Johnson, and Nic Claxton makes a lot of sense, and that athletic five-some could compete in the East.

As for the Suns, they go all in on Chris Paul’s final season and solve their Jae Crowder problem at the same time. Because they are giving up two young starters, the Suns won’t have to throw in as many picks as most teams. Let’s call it two lottery-protected ones and a pick swap in between.

This gives the Suns a starting five of Paul, Durant, Devin Booker, Deandre Ayton, and Damion Lee, which has to be an NBA championship favorite in 2022-23 and maybe even a year or two beyond.