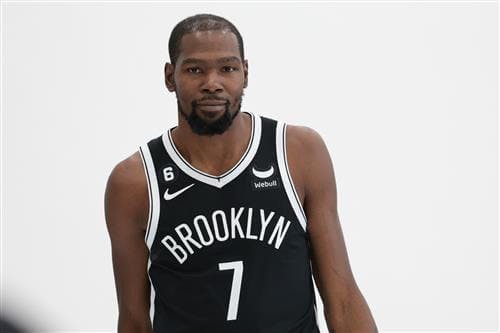 Well, the Brooklyn Nets are starting to fall apart… again. Kevin Durant and co. have started the season 2-6, and somehow that doesn’t encapsulate how disastrous this season has been. From Kyrie Irving’s anti-Semitic Tweets to the firing of Steve Nash to Ben Simmons, there has been plenty of drama surrounding this roster.

Amid all of this chaos, there’s one thing that’s on many fans’ minds: is it time for a Kevin Durant trade? Remember, the star requested a trade away from the Nets last season. At first, we thought that the drama has finally solved itself. With everything’s that happening in Brooklyn, though, it seems likely that KD will hit the trade market, whether it’s by his choice or not.

Naturally, there will be plenty of teams angling for a Kevin Durant trade. Among all these teams, which ones should not pull the trigger on a trade for the Nets star? Let’s take a look.

NBA
After Kyrie Irving’s suspension, what’s next for Kevin Durant and the Nets?

The Raptors arguably have the best assets for a potential Kevin Durant trade. They flew under the radar for most of the off-season, but started gaining traction as a dark-horse candidate towards the end. They have the right mix of intriguing talent and picks to offer to the Nets… but they shouldn’t.

Toronto has looked pretty good to start this season, and a big part of that is the supposed core of a Kevin Durant trade. O.G. Anunoby and Gary Trent Jr have looked really good in their roles (with Anunoby getting some early DPOY whsipers). Scottie Barnes has improved significantly from three-point range. And most importantly, their experiment of throwing long forwards at their opponents seems to be working so far.