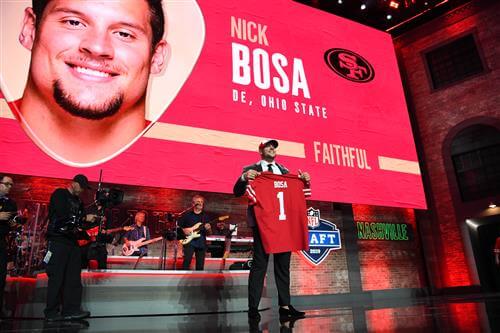 The San Francisco 49ers have selected Nick Bosa with the second-overall pick in the 2019 NFL Draft.

Bosa (6-foot-4, 266 pounds) joins a star-studded 49ers defensive line alongside DeForest Buckner and Dee Ford. Bosa had four sacks in three games last season before missing the rest of the year with an abdominal injury. He posted 8.5 sacks and 16 tackles for loss as a sophomore in 2017. Bosa was the consensus top pass rusher in this year's class, and NFL.com's Lance Zierlein compared him to Michael Bennett.

He's known as a technician who is great with his hands at the point of attack. It's well documented that Bosa has a football pedigree, most recently with brother Joey Bosa being taken third overall by the Los Angeles Chargers back in 2016. Nick is expected to be every bit as productive in the NFL.