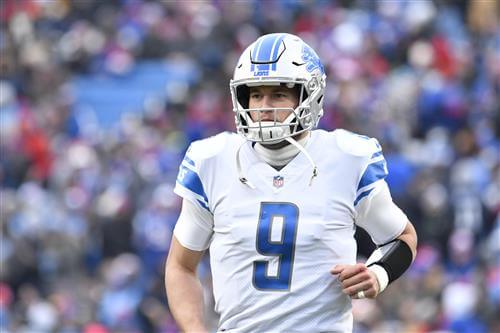 Matthew Stafford is departing the Motor City, and the Dallas Cowboys — because of course — are being rumored as a landing spot for the veteran Detroit Lions quarterback.

In his list of “top potential trade destinations,” Yahoo Sports’ Jeff Risdon speculated that Dallas could make a run at Stafford by offering a trade package that includes their first-round pick (No. 10 overall) and starting wide receiver Amari Cooper or Michael Gallup, among other considerations.

“The Dallas Cowboys now have another alternative if they choose to move on from pending free agent Dak Prescott, who is coming off a serious injury,” Risdon wrote. “Stafford is a Texas native and has the type of physical arm talent that has made Cowboys owner Jerry Jones weak in the knees before. Stafford’s salary with bonuses comes cheaper than what it would take for the Cowboys to use the franchise tag on Prescott once again, and Stafford is fully healthy relative to the younger Prescott. The Cowboys have some wide receiver depth (Michael Gallup, Amari Cooper) that could sweeten the pot along with their No. 10 overall draft pick in any deal with Detroit.”