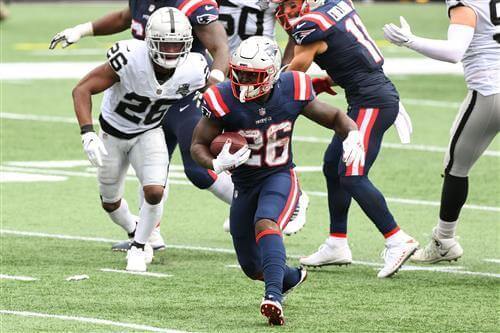 NFL teams are dealing with bloated rosters after taking in plenty of new players via free agency and the draft. Organizations have also been coming to terms with undrafted rookie free agents, loading up their cupboards to prepare for training camp and the preseason.

Many of these players will end up going back onto the open market before the 2021 season kicks off, giving teams a chance to shuffle the deck once again by bringing in talent who didn't pan out elsewhere.

Plenty of recognizable names will be jettisoned before the offseason wraps up, with this article focusing on the best player from each team that has a chance to be cut.

Several factors were considered when choosing these release candidates, including age, dips in production, high salaries, their franchise's cap space and the potential to be replaced by a younger or cheaper player on the roster.

With that in mind, here are the top talents who could be cut in 2021.

The aging Bills defensive line got much younger this offseason after the club used a pair of early draft picks on Gregory Rousseau and Carlos "Boogie" Basham Jr. These additions, along with the development of A.J. Epenesa—the edge-rusher Buffalo selected in the second round last year—may render one of the incumbent defensive ends expendable.

Both Mario Addison and Jerry Hughes are on the wrong side of 30 and being paid big bucks in 2021. Addison has an $8.2 million cap hit, a higher figure than all but four other players on the roster. His contributions don't exactly warrant that type of deal, as Addison recorded just five sacks last year, his fewest since 2013. The Bills could free up an additional $3.4 million by parting ways with him after his one season with the club.

Hughes might even make more sense to cut given the team could save more than $6 million by releasing him, but he's the longest-tenured player in the Buffalo locker room and served as the defensive captain last year.

The Dolphins went from having one of the poorest receiving corps in the league to one of the more intriguing ones this offseason. The free-agency addition of Will Fuller V and the draft selection of Jaylen Waddle have injected a ton of talent into this unit, opening the door for at least one incumbent wideout to be released.

Jakeem Grant could be a cut candidate after failing to live up to his potential during five seasons in South Beach. The 28-year-old is owed $4.7 million for the upcoming campaign, a hefty price to pay for a player who caught just 36 passes for 373 yards and a score last year.

While Grant did earn second-team All-Pro honors for his contributions in the return game last season, he's being paid to contribute as a receiver. Considering he hasn't done that at an adequate level, Miami can safely show him the door.

The Patriots once felt strongly enough about Sony Michel to make him a first-round pick, but he has struggled to live up to the lofty expectations that come with such a selection.

He played a key role as a rookie during the team's 2018 campaign and subsequent Super Bowl run, but injuries and poor production have plagued the Georgia product since. He saw action in just nine games (starting six) last year, amassing a career-low 79 totes for 449 yards and a single touchdown.

New England declined to exercise Michel's fifth-year option earlier this month, potentially making 2021 his final season with the organization. Damien Harris has the chops to be the team's starting running back, and the Pats used a fourth-rounder on Rhamondre Stevenson, leaving Michel as a depth option at best.

Getting rid of Michel now would free up snaps to develop Stevenson and save New England almost $1 million.

The Jets were one of the more active teams during free agency and the draft. Some of their acquisitions have made their incumbent contributors expendable, including offensive lineman Greg Van Roten.

Van Roten has played every interior line spot for Gang Green, including 76 percent of the team's offensive snaps at right guard in 2020.

With Van Roten accounting for a $3.6 million cap hit, the Jets would be wise to release the 31-year-old this offseason. The team drafted an elite OL prospect in first-rounder Alijah Vera-Tucker, plus signed Dan Feeney in free agency, giving this group plenty of depth to overcome the loss of a starter in Van Roten.

The Ravens have a ton of work to do next offseason, which is when guys like Calais Campbell, Jimmy Smith, Pernell McPhee, Mark Andrews and many others are set to hit the open market. They can start freeing up the space to keep some of these veterans now by releasing polarizing defensive lineman Brandon Williams.

Williams has a $12.9 million cap hit this year, the third-largest on the roster. It's a massive amount to pay for a player who not only missed three games but also played just 33 percent of Baltimore's defensive snaps in 2020.

While Williams has been a steady asset in the past, it appears as though the 32-year-old's best days are now behind him. Keeping an overpaid run-stuffing specialist around just doesn't make sense for the Ravens anymore.

Although the Bengals may want to keep C.J. Uzomah around for his good blocking capabilities and decent hands for a tight end, he's an ideal candidate to cut for cap savings.

Uzomah only participated in two games before a torn Achilles tendon cut his 2020 campaign short. That devastating injury, plus the promise that Drew Sample showed while filling in, could push Cincinnati to part ways with its incumbent starter at the position.

Releasing Uzomah—who is going into the final season of his three-year, $18.3 million contract—would open up more than $5 million in cap space. The club would still have Sample and Mason Schreck under contract, and they make far less than Uzomah ($2.4 million combined).

The Browns already had one of the league's deeper receiving corps going into the offseason. They recently added even more talent by drafting Anthony Schwartz in the third round.

With that pickup, it would be a shock if Cleveland didn't cut at least one holdover from last year. One possible ax is JoJo Natson, the part-time wideout, part-time returner going into his fifth season as a pro.

Natson barely made an impact offensively for the Browns last year, logging just nine snaps and picking up one rush for three yards during his three appearances. He returned only three punts and a single kick in that span as well.

Given the 5'7", 153-pounder relied on his speed to make an impact, it stings even more that his campaign was cut short by an ACL injury. While the Browns did dole out a one-year, $1.1 million contract to potentially keep Natson around for 2020, the team can clear most of that off the cap by releasing him.

The Steelers had to make some tough decisions this offseason because of the shrinking salary cap, but one player who has remained safe so far is cornerback Joe Haden.

That could change if the organization decides it would rather have $7 million in savings to shore up the rest of its roster. While Haden has been a steady starter for Pittsburgh, he's been playing average football at best. Pro Football Focus gave Haden a grade of 66.6 in 2020, leaving quite a bit to be desired for a player on his salary.

Unfortunately for the Steelers, they didn't take any cornerbacks in the draft and would be relying heavily on unproven guys to fill the void. If the Pittsburgh brass feels young players such as Justin Layne, 23, and James Pierre, 24, can fill in for Haden, this surprise cut could happen.

The rebuilding Texans have problems plaguing nearly every area of their roster. The cornerback spot isn’t one of their worst issues, but it certainly doesn't help that their top player at the position has been unreliable over the past few seasons and already won't be available in Week 1.

Bradley Roby has to finish serving the last game of a six-game suspension he received for violating the league's performance-enhancing drugs policy. The 29-year-old hasn't played all 16 games in a season since 2017 and hasn't seen the field for more than 61 percent of Houston's snaps since he joined the club in 2019.

Considering the Texans could save over $8 million by releasing Roby—who is under contract through the 2022 season—it would give them plenty of flexibility to address the myriad of holes remaining in their lineup.

The Colts have a decent amount of talent at the tight end position right now, with Jack Doyle penciled in as the starter, Mo Alie-Cox serving as the No. 2 option and promising rookie Kylen Granson entering the mix after being selected No. 127 overall.

The depth behind Doyle could entice Indianapolis to release the 31-year-old, who has never quite panned out as a pass-catching playmaker since entering the league. He's shown plenty of promise—notably in 2017 when he hauled in 80 receptions for 680 yards and four touchdowns—but is coming off a disappointing season during which he caught just 23 balls for 251 yards.

That kind of production makes it difficult to justify paying Doyle almost $6 million for the upcoming season. Releasing him would save around $4 million, plus clear the way for the younger Alie-Cox, 27, and Granson, 23, to take on bigger roles in the offense.

Taven Bryan has been one of Jacksonville's biggest defensive draft-pick whiffs. The club used a first-rounder on the Florida product back in 2018, but he has hardly performed at an acceptable level in the three years since the Jaguars selected him.

Bryan has played in all 48 regular-season games since turning pro but hasn't participated in even 50 percent of the team's defensive snaps in any season. He hasn't done much when he is on the field either, recording just 71 tackles (11 for a loss), 17 quarterback hits, 3.5 sacks, one pass deflection and one forced fumble.

Although the move wouldn't be a big cap-space saver—Jacksonville would get about $1.2 million back by releasing him—it would open up a roster spot the club can use to find a more impactful player.

The Titans have leaned heavily on Ben Jones for the past half-decade, installing him as their starting center in 2016 and getting 79 out of a possible 80 games from the stalwart lineman.

While Jones has been a reliable part of Tennessee's trenches, he's going into the final year of his contract. With a sizable cap hit of $7.3 million—and a dead cap number of just $1 million—the Titans can loosen up a lot of cash by parting ways with the 31-year-old.

Jones is a quality center. He graded out at a 78.6 and didn't allow any sacks last year, according to PFF; however, he did commit four penalties. He's also getting older and could hit a decline soon, leaving the door open for the Titans to not only save a few dollars but also get younger at the position.