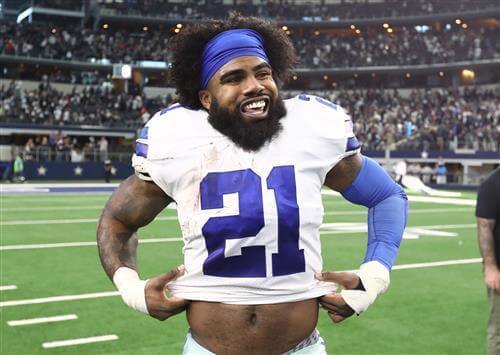 Holdout running back Ezekiel Elliott is in receipt of a new contract extension offer from the Dallas Cowboys that a source close to the negotiations tells us would put his new annual salary "close to the Todd Gurley range."

The Cowboys as of a month ago were willing to pay Elliott more than the Jets’ Le’Veon Bell ($13 mil APY) but less than the Rams’ Gurley ($14 mil APY).

How significant is the movement from Dallas? That is in the eye of the beholder. Amid breathless reports that Elliott has “turned down the offer(s) ... well, that’s self-evident, as otherwise he’d be in
Frisco with a pen in his hand and a helmet at the ready. Meanwhile, Cowboys COO Stephen Jones is on-record as telling 105.3 The Fan that Dallas has been “very generous” in talks.

Meanwhile, a few days ago Jones downplayed a 105.3 The Fan report that suggested an agreement was “imminent” while also mentioning how quickly a deal can get done.