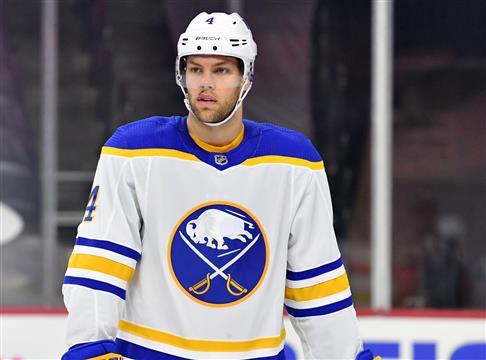 The only thing left is the press conference.

Unless the Buffalo Sabres have a heck of a cliffhanger coming, the NHL's April 12 trade deadline will be preceded by at least one completely unsurprising transaction, in which big-ticket forward and former MVP Taylor Hall's truncated season in competitive purgatory is ended when he's sent to an ambitious contender.

The 29-year-old left winger's one-year, $8 million deal with the Sabres was among the biggest shockers of the offseason, but the Western New York experiment has turned ugly with the team's plummet to the East Division basement amid a stretch of zero wins in 18 games from February into late March.

The 2018 Hart Trophy winner was a healthy scratch ahead of Tuesday's game against the Devils, a telltale sign that a trade is likely to happen.

Hall had just two goals and 17 points in 37 games through Saturday, including no goals since March 4.

And though he suggested earlier in the season that his stay in Buffalo could last "a while," it's the consensus of trade-watchers these days that Hall will be heading to his fifth team sooner than later.

Still, finding the right fit could prove difficult. Few contenders can afford to take on the contract, and Hall has a full no-movement clause. The Sabres could also be asked to absorb part of his cap hit to facilitate a trade.

With all that in mind, the B/R hockey team got together to update its previous list of would-be trades and landing spots for 2010's top overall draft pick. Take a look at our latest thoughts and drop a comment or two.

It nearly happened 11 years ago.

Back then, as Taylor Hall and Tyler Seguin approached the NHL Draft as 2010's preeminent prospects, the Boston Bruins were positioned to get one or the other after the top pick by the Edmonton Oilers.

Had the Oilers grabbed Seguin, there's an excellent chance Hall would have begun his career with the Bruins, who wound up winning the Stanley Cup the following spring against Vancouver.

Instead, Hall went to Edmonton and Seguin headed to Boston, where he played three seasons and scored 56 goals before being traded prior to the 2013-14 season to Dallas—where he reached the 2020 Cup final.

Hall, on the other hand, has played with four teams in 11 seasons and appeared in just 14 playoff games.

His arriving at last to the Bruins could come via a blockbuster that'd send 2015 first-rounder Jake DeBrusk, who had 62 goals in his first three seasons but has scored just three in 22 games, to the Sabres.

We won't promise those as the final logistics, but we will label Boston as the Hall Sweepstakes frontrunner.

Another team, another near miss.

The Colorado Avalanche were in the mix when Hall went from the New Jersey Devils to the Arizona Coyotes a few years back, and they were again a pursuer—and widely considered a favorite—before the Sabres pulled their surprise and got him as a free agent for the aforementioned one year at $8 million.

Buffalo's initial asking price for Hall reportedly includes a first-round draft pick, which the Avalanche may be willing to part with for the chance to finally meld the former MVP with superstar Nathan MacKinnon and Mikko Rantanen on as good a top line as there is in the NHL.