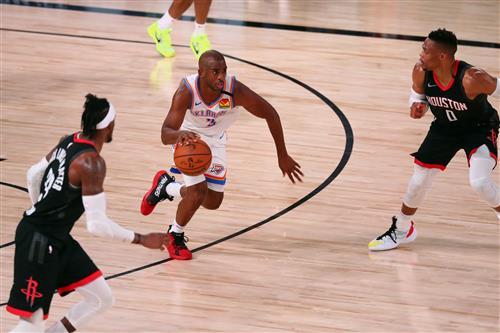 Chris Paul silenced his critics in a big way this season. He proved that he’s still got a lot to give to a contending team and even though the outcome wasn’t what he expected, he was a shot away from making it to the Western Conference Semifinals.

Paul’s leadership on and off the court was remarkable. His grit and desire to win at all costs was a pretty obvious and contagious feeling night in and night out and the Oklahoma City Thunder, who were given 0.5% chances to make the playoffs at the start of the season.

And now that CP3 has once again showcased his talents, it seems like the Los Angeles Lakers would be tempted to trade for him, even if that meant absorbing his huge contract. According to Zach Buckley of Bleacher Report, the Los Angeles Lakers could put together a trade package involving Danny Green, Alex Caruso, Kyle Kuzma, and Kentavious Caldwell-Pope in return for the Point God: