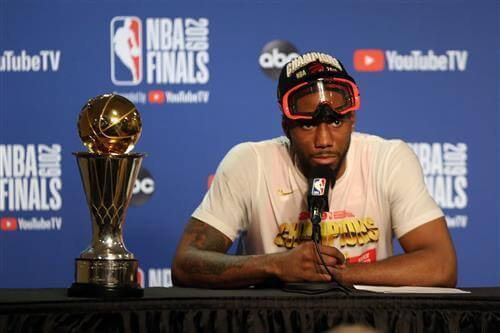 Late Friday night, Kawhi Leonard finally provided an answer to the question sports fans had been wondering for months: where would he sign in free agency? Leonard chose the LA Clippers, picking them over the Los Angeles Lakers and a return to the Toronto Raptors. After he proved himself to be capable of leading a team to the championship as the No. 1 option, his free agency became the biggest story in the NBA, topping the free agency decisions of Kevin Durant, Kyrie Irving and Jimmy Butler. But while most of the top free agents chose their homes early in the process, Leonard’s free agent decision played out over the course of a week, leading to increased anticipation, hunger, and one of the wildest stories since DeAndre Jordan was held hostage in Houston.

The story begins in mid-June, a few weeks before free agency was set to begin. Adrian Wojnarowski, the most respected and authoritative reporter in the NBA, said on ESPN’s “Get Up” on June 18 that Leonard was focused on the Clippers and would likely be choosing between them and the Raptors. He noted the Lakers had very little chance because Leonard did not want to be the third star behind LeBron James and Anthony Davis, and also because the Lakers had a difficult salary cap situation at the time. Woj went so far as to say he wasn’t even sure that the Lakers would get a meeting with Leonard.

That report more or less set the tone and expectation for Leonard’s free agency: it would be a two-way race between the Clippers and Raptors. The Lakers were hardly a consideration.

Despite Woj’s report, the narrative surrounding the Lakers’ chances of landing Kawhi Leonard began to twist over the ensuing days as free agency neared. The New York Times’ Marc Stein was at the forefront of the changing narrative, pumping up the Lakers and Leonard. Stein reported on June 25, then June 28, and again on July 2 that the Lakers believed they were heavily in the mix for Leonard and that they would land him.

Stein’s reports were augmented by Stephen A. Smith saying on the June 28 edition of “Get Up” that Kawhi was seriously considering signing with the Lakers. Keep in mind that Smith is so close with Magic Johnson that the former Lakers president joined Smith’s show after resigning from his position. Also keep in mind that on the same day Smith shared his report, details leaked to the media about Magic’s planned involvement in recruiting Leonard to the Lakers.

By then, Yahoo’s Chris Haynes had confirmed the Lakers and Clippers would get meetings with Leonard, while Woj confirmed that Kawhi’s final meeting would be with the Raptors.

The belief had been set by Woj that Leonard was deciding between the Clippers and Raptors, with the Lakers being major underdogs. But following each passing report that the Lakers believed they would factor into the race more than Woj gave them credit for, Lakers fans begin to grow more and more confident.

And that brings us to the Reddit portion of the story.

On June 12, three days before the Lakers would make a massive, game-changing trade with the New Orleans Pelicans for Anthony Davis, a Reddit user named “RDAmbition” posted in the Lakers Reddit forum saying that the “majority of framework” of a trade between the Lakers and Pelicans for Davis had been agreed upon.

“The problem has been the third team, during the initial stages it was between Chicago and Phoenix. However both teams have fallen off, two new emerging team have came out, the wizards and the hawks.

“There is a high sense of optimism that the trade will get done.”

Reddit users aren’t known for breaking news in their fan forums, but this post had made its way to the top of the Lakers page (172,000 members) and fairly high on the general NBA forum (2.5 million members). A forum moderator explained that they left the post up rather than delete it as they ordinarily would do because “RDAmbition” had previously verified his sources.

And guess what? A few days after that post by RDAmbition, seemingly out of nowhere, the Lakers pulled off a stunning move, acquiring Davis from the Pelicans for three players and a bevy of draft picks and pick swaps. Though RDAmbition did not actually break the news of the trade — Wojnarowski did — the trade being completed three days after RDAmbition said it was close to happening gave him credibility as a Lakers insider.

Despite the seeming credibility, RDAmbition acknowledged in subsequent Reddit threads that the scope of his inside information was limited. For instance he didn’t know of the actual trade being completed on Saturday, just that a three-way deal was being discussed a few days before.