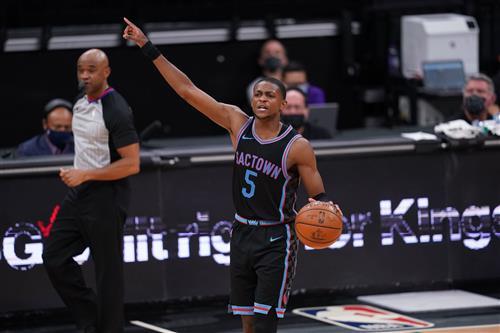 The trade deadline is just around the corner in the NBA world. There's no doubt a lot of teams will be looking to add players or shake up their roster.

Multi-team trades are more commonplace in the modern NBA, and it is possible that we see some blockbuster trades ahead or at the deadline.

In this article, we provide a multi-team blockbuster trade scenario where players that have been featured in trade rumors like Ben Simmons and Harrison Barnes move on to new destinations that could use their abilities. The Kings would notably get Ben Simmons and Russell Westbrook, the 76ers would get De'Aaron Fox, and the Los Angeles Lakers would get Harrison Barnes.

Kings Shake Things Up And Become A More Competitive Team

The Sacramento Kings have had the league's longest playoff drought. This trade would help them acquire some players who can get them to the postseason.

Ben Simmons would obviously be the main acquisition for the Sacramento Kings. He is a top-tier defender and playmaker and would be an even better player if he develops his offensive game further. Simmons is the type of talent worth taking a risk on.

A major appeal of this trade for the Sacramento Kings is their ability to retain Tyrese Haliburton and Davion Mitchell while getting impact players on the roster.