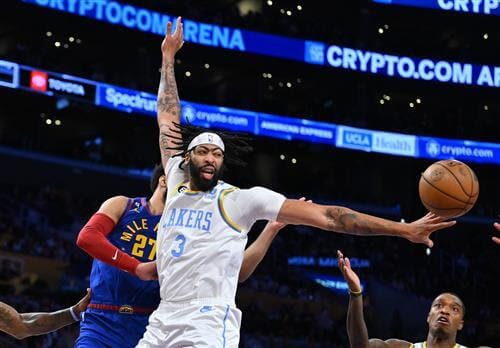 Right now, at this very moment, Anthony Davis is the best basketball player in the world. We haven't, even for a stretch, been able to say that for a long time, and who knows how long we'll be able to keep saying it this time. But it's true right now, and the Lakers have an organizational obligation not to waste this opportunity.

Either cash in the draft picks and bring in some help, or move Davis at his highest point of value. To me, either would be a defensible decision, but I would lean toward trading Davis. I don't think he can stay healthy, plain and simple. Once he gets hurt again, his trade value will plummet and the Lakers will be done, if they're not done already.

Yes, they've won seven of nine, including a 133-129 thriller over the Bucks on Friday, which we'll get to momentarily. But they're not a contender. If they want to become a contender, and they don't want to trade Davis, they have to let loose of those two draft picks.

Waiting for next season just isn't a smart bet when LeBron James is in his 20th year and Davis is a threat to go down like a sack of bricks every time he takes a step. Frankly, waiting until next month isn't even that smart of a bet.

Also, even if the Lakers were to go the other way and go all in for, say, Buddy Hield and Myles Turner, or DeMar DeRozan and Nikola Vucevic, only for Davis to go down for any length of time later in the season or at any point during the playoffs -- if they were even able to make it that far -- they will have gone all in just to go bust anyway.

Then they'll be back to whatever plan they're operating under right now -- which is what, signing Kyrie Irving in the summer? Come on. So now we're going to bet on the surest way there is to screw up your team and an even-more fragile Davis next season, when LeBron will be 39 and in a walk year and they'll have to also lose sleep over the pickle of trading perhaps the greatest player ever or losing him for nothing in 2024?