9 quarterbacks who could be free agents in the 2020 NFL offseason, sorted by likelihood
SB Nation | Aug 14 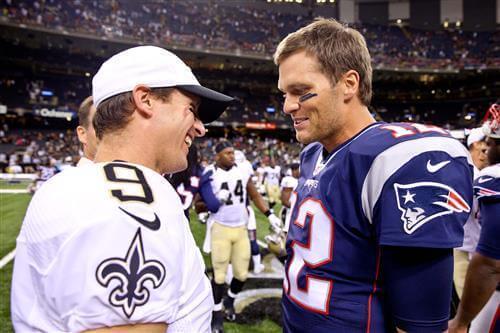 The 2019 quarterback free agency class had a severe lack of star power. Even with Super BowlMVP Nick Foles and the one and only Blake Bortles, there weren’t many click-worthy quarterbacks available at the start of the new league year. Things could be different next offseason, however.

In 2020, several marquee quarterbacks could hit the open market. In a position as important as quarterback, teams will either have to shell out some cash to keep their starters, or hit the reset button on their offense. Sometimes it’s a no-brainer, but it’s not always an easy choice to make.

Let’s take a look at the top quarterbacks currently set to be free agents after this season, though several of them will likely get new contracts before that happens. We arranged the list into tiers, from the guys least likely to leave to the ones who are most likely to find a new team.

Fresh off another Super Bowl win, Brady is continuing his quest to keep playing until the end of time. A day after his 42nd birthday, Brady signed a two-year, $70 million extension with the New England Patriots. He will be making $23 million this upcoming season, but the contract has some interesting stipulations attached to it.

The final two years of Brady’s deal become voided after this season, hence making him a free agent next offseason. The terms of the contract free up cap space for the Patriots, which isn’t something new: Brady has been taking discount deals for a while now.

While the new contract helps New England this season, Brady carries a $13.5 million cap hit next season, whether he’s on the team or not. That means the Patriots will want to get him signed to an extension before free agency starts — not that they need the extra motivation.

In 2018, Brady didn’t show any signs of slowing down, throwing for 4,355 yards and 29 touchdowns while maintaining a completion percentage of 65.8. He’s been in New England for the entirety of his 20-year career and has delivered six championships.

Still, the structure of his contract won’t stop speculation about Brady moving on from New England, especially since he put his house up for sale:

However, the chances of him leaving are cosmically small, unless he decides to retire after the season.

Like Brady, Brees technically could be a free agent after this season. In fact, they have a lot in common:

And like his counterpart in New England, Brees reconstructed his contract to clear up cap space for a team that’s a Super Bowl contender. The biggest move the New Orleans Saints made was locking down Brees’ favorite target, Michael Thomas, with a massive five-year, $100 million dealright before the preseason began.

Brees is coming off another stellar season. In 2018, he led the league in both completion percentage (74.4) and passer rating (115.7), and threw for 32 touchdowns. But at 40 years old, retirement isn’t that far off for Brees.

If he keeps playing at a high level, the Saints will want to reach an agreement with Brees quickly, as he will have a cap hit of $21.3 million next year if a new deal isn’t done. They’ll need the space, too. The Saints have other major contract decisions coming up in the next two seasons — both Alvin Kamara and Marshon Lattimore will soon be due raises.

While the Saints have kept Teddy Bridgewater around as good insurance — and possibly as their next starting quarterback — it’s hard to see Brees going anywhere else as he enters the twilight of his career. Just like Brady.

Rivers is the heart and soul of the Los Angeles Chargers. In his 13th year as starting quarterback, Rivers had 4,382 passing yards, his sixth straight season with 4,000 or more. He led the Chargers to their first playoff appearance in 2013 and will make a run at the AFC West title in 2019, his final year under contract.

Extending Rivers isn’t the only contract LA has to deal with soon. Melvin Gordon has spent the summer holding out for a new deal. The contracts of safety Adrian Phillips and center Mike Pouncey expire next March too.

Rivers doesn’t seem too worried getting an extension, though. When asked about his contract situation in July, Rivers told reporters, “The expectation and hope is to be here again next year, but it doesn’t need to be done right now.”

From the look of it, there doesn’t seem too much of a rush from both sides to get this deal done. However, it would be a shock to see the Chargers move on from their longtime quarterback. He hasn’t missed a game as a starter and has settled down in Southern California with his family.

It’d be surprising if he left

Prescott finished strong in his third year as the starting quarterback for the Dallas Cowboys. After a slow start, Prescott led the Cowboys to seven wins in their last eight games and ended up with a career high in passing yards. Dallas won the NFC East and made it to the Divisional Round before falling to the Rams.

His play picked up when the Cowboys acquired receiver Amari Cooper, and with Cooper as his main wideout for at least 2019, Prescott is primed to have another good season.

Prescott has shown he has the potential to be a top-end starter in the NFL, and he remains a solid dual threat, rushing for six touchdowns in each of his three seasons in the league. He’s also a bargain for the Cowboys. This upcoming season, Prescott is only scheduled to make $2 million and unless the Cowboys give him an extension, he’ll become a free agent in 2020.

But Jerry Jones has always had high praise for Prescott and looks committed to him. There isn’t a big possibility that he lets Prescott leave Dallas, though the Cowboys are also facing a decisionwith Ezekiel Elliott and Cooper. Signing all three would be locking them, and their large salaries, in for the distant future. The Cowboys should be playoff contenders again this season, but have some contract negotiations they have to get in order as well.

The New York Giants drafted for the future when they took Duke quarterback Daniel Jones with the sixth overall pick this year. But for the present they are going to be sticking with Eli Manning.

In 2018, Manning put up some of his best stats in years. He passed for 4,299 yards, had a career-best 66 percent completion rate, and his 11 interceptions were his lowest total since 2008. Despite that, New York still finished last in the NFC East at 5-11 and now that Manning is 38 years old, his time as QB1 for the Giants is nearing its end.

With the addition of Jones, the Giants now have a future replacement for Manning. If Manning struggles in 2019, the Giants could turn to the rookie during the season. Either way, New York is set to face an interesting quarterback situation next offseason when Manning becomes a free agent.

New York has some options here. There have been no real talks of a contract extension yet, so it seems he will be playing out this season without a new deal. It’s easy to see the Giants bringing Manning back if he plays well or if Jones shows he’s not ready to be the starter yet.

They can re-sign Manning to a short-term deal like Brees and Brady did, and then use that time to groom Jones some more. Or they can go head-first into a new era.